The princess-to-be hangs from the window of her overturned carriage, with little sparrows attempting to lift her limp and presumably dead figure. Paparazzi snap photos of the scene. The crash is housed in a crumbling castle with dour attendants milling outside, saying “end-joy” to those who pass. There is no happy ending for Cinderella in this diorama.

The dark parody of Disneyland – aptly named Dismaland – is the latest project of British street artist Banksy. The famous ‘guerilla’ artist first appeared 20-years ago in the U.K., where his political and often provocative work quickly made him the biggest name in the international street-art scene.

His new “bemusement park” is housed in Tropicana, a disused swimming pool complex that juts out onto the beach in the English coastal town of Weston-super-Mare, which he used to visit as a child. “I hope everyone from Weston will take the opportunity to once more stand in a puddle of murky water eating cold chips to the sound of crying children,” said Banksy to local newspaper, The Weston & Somerset Mercury.

Banksy’s impish humour resounds through what he calls a “festival of art, amusements and entry-level anarchy.” Even the park’s website self-deprecatingly bills it as “the UKs most disappointing new visitor attraction.” Yet the new pop-up exhibition has enough thought-provoking and hilarious content to have encouraged hundreds of locals to line-up to see it.

“This is one of the best things to happen to Weston,” says Judith Groves, 48, who began queuing at 5.30 am. Her efforts paid off. Five-and-a-half hours later she was in the 2.5 acre theme park. “I am like a kid in a sweetshop, I feel like I have won a golden ticket.”

In Dismaland, everything one expects from a funfair has taken a dark and sarcastic turn: A grim reaper performs donuts in a bumper car. A horse-meat butcher sits on a merry-go-round, while people try to ‘Hook-A-Duck’ from an oil-spill. The puppets Punch and Judy are also there, making wicked references to popular culture. “Who bought all the copies of Fifty Shades of Grey? The Ladies! Bless their little hearts. So no more silly crying about damaged body parts,” says Punch.

While the obvious jibes against manufactured theme parks are present – exampled by an installation of an orca jumping out of toilet into a tiny paddling pool – for Maskull Lasserre, a Canadian artist participating in Dismaland, the show is a trope on the coastal fairgrounds found in small towns around the globe.

“I think it is a respectful take on a seaside town,” says Lasserre, “Dismaland is saturated with the notion of things not meant to be, everything is subversive and ironic… it ends up destabilising my perception of the town.”

The temporary exhibition features over 50 artists from the U.S., Europe and the Middle East. The line-up features big names, including American artist Jenny Holzer, Britain’s Damien Hirst, and David Shrigley. There are three galleries, tents, dozens of installations, an open-air cinema showing short films and bands like Massive Attack and Pussy Riot will perform in the coming weeks.

Before its unveiling on Thursday, many of the local residents were unaware of Banksy’s plans for the area. In an effort to misdirect them, placards appeared around the Tropicana insinuating that there was a film crew at work. “The signs said it was for Grey Fox” says Julia McKenzie, who can see Dismaland from her kitchen window. She googled the name and found an IMDB website for what turned out to be a fake film. “They really did it well,” says the 39-year-old.

This is typical behaviour from the prankster, who enjoys teasing the public and having fans second guess everything from his identity, which is still unknown, to where his next work will crop up: Banksy’s New York residency in 2013 had fans following scraps of clues to new pieces of work.

Dismaland is being called the artist’s biggest project yet, and residents hope that it will revitalise Weston-super-Mare. His 2009 exhibition in Bristol, a city 18 miles from Weston attracted over 300,000 visitors and generated £10 million for the local economy, reports the Guardian. The council for North Somerset, the area where Weston-super-Mare is located, has struggled to find investors for the abandoned Tropicana. Dismaland might still bring change to the town’s fortunes.

“Though the seafront is looking good, Weston has a feel of things waiting to happen and it has done for years,” says North Somerset councillor Tom Leimdorfer, “this could be a catalyst for something to happen.”

Local teaching assistant Charlotte Chambers thinks the town needs a lot of work. “I really hope our local council sees the irony of Dismaland, in the sense that the Tropicana has been derelict for so long,” says Chambers, as she played on an oil caliphate-themed crazy golf course in the exhibition. “The town centre is horrendous, shops have closed down and the council really needs to do something.”

By the simple act of putting Dismaland in Western-super-Mare, Banksy has opened the town to an international audience, with as yet uncertain consequences. 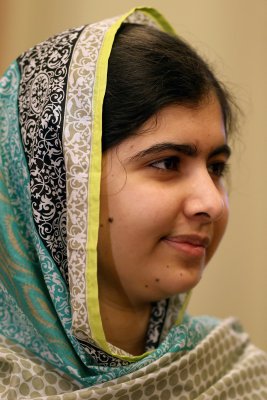 Malala Aced Her High School Exams
Next Up: Editor's Pick