Donald Trump gave a provocative but meandering speech about immigration and foreign policy to tens of thousands in an arena in Mobile, Alabama, Friday, as the billionaire business mogul sought to move his campaign into a higher gear.

Leading the polls for the Republican presidential nomination since mid-July through a largely media-driven campaign, Trump went for a more traditional event in the midst of several key Southern states.

“The reason I have this really incredible enthusiasm, the reason I have it is because I know what I’m doing,” Trump said in his unscripted remarks. “And I don’t say that in a bragging way. You people are looking for somebody who knows what he’s doing.”

As he has done in interviews on cable news networks, Trump took swipes at the more traditional political candidates he’s competing with, accusing them of being controlled by lobbyists. “All these guys like Bush and Hillary, they’re taken care of,” he said.

He also singled out the runner-up for the Republican nomination, former Florida Gov. Jeb Bush. “Who would you rather have president, Trump, or Bush?” Trump said, spurring the crowd to chant his name.

The Trump campaign and local authorities predicted a crowd of some 40,000, the largest turnout of any presidential campaign so far. Vermont Sen. Bernie Sanders, another anti-establishment candidate, has drawn crowds of close to 28,000. With that expectation in mind. the Trump campaign moved the event from the city’s smaller Civic Center to the 43,000-seat Ladd-Peebles Stadium.

It wasn’t clear that he had pulled as many people as expected to the arena, as large sections remained empty, but the overall turnout was still the largest for any Trump event so far.

Trump’s rally is just one more sign the real estate mogul is serious about winning the Republican nomination. Mobile is within a few hours drives of many millions of devoted Republican voters across not just Alabama, but Louisiana, Florida and Georgia as well, many of which are key primary states.

Alabama is one of the five southern states scheduled to hold a primary on March 1, a date that will be crucial in sorting out a packed Republican field that will likely still be teeming with contenders after contests in the four early states. Winning a good portion of those five states—which also include Texas, Virginia and Arkansas—on the same day could be key to winning the nomination. Louisiana’s primary is four days later.

Sen. Ted Cruz, who is vying with Trump for a similar anti-establishment sector of the GOP electorate, is also working hard at mobilizing the so-called Southeast Conference states, as is former Arkansas Gov. Mike Huckabee.

During the 50-minute speech, Trump attacked the political establishment, a tack that has helped him gain momentum with Republican voters frustrated with the status quo. In government “we use political hacks, diplomats, we use people who have never held a real job,” he said.

He also insulted Secretary of State John Kerry and criticized the Iran nuclear deal, saying that Kerry’s bicycle accident during the Iran negotiations in which he broke his leg “was the good part of the deal.”

When someone in the crowd called out for Trump to opine on Israel, the candidate was enthusiastic. “I love Israel,” he said. “Israel? I loooove Israel.”

“The reason people like what I’m saying is I want to put that energy—I don’t know if it’s genius or screwed up—I want to do something with it,” Trump said. “I will devote 1,000%.” 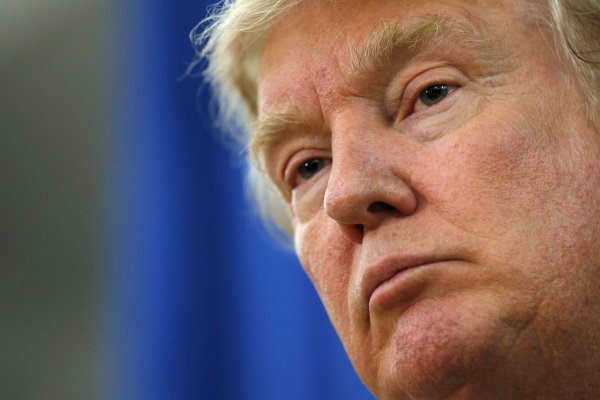 Donald Trump Responds to Boston Assault: 'I Would Never Condone Violence'
Next Up: Editor's Pick