An Indian movie set to be released next week was banned in Pakistan on Thursday at the behest of wanted terrorist Hafiz Saeed, who filed a plea in court saying the film contains “filthy propaganda” against him and his organization.

The order to ban the film was issued by a judge at the Lahore High Court, the Press Trust of India news agency reported.

Saeed is the head of Jamaat-ud-Dawa — the political wing of militant group Lashkar-e-Taiba. Both organizations are blacklisted by the U.S., which has a $10 million bounty on Saeed. The U.N. declared Lashkar-e-Taiba a terrorist group in 2005.

The movie, titled Phantom, features Bollywood superstars Saif Ali Khan and Katrina Kaif and is set in the aftermath of the November 2008 Mumbai attacks that Saeed is said to have been the driving force behind. The attacks killed more than 150 people.

“There is a direct threat to the life of the petitioner and his associates emanating from the content of the trailer of the film,” Saeed’s lawyer said in an Aug. 8 petition. “It is obvious that dialogues coming out of the lips of the different Indian actors and actresses will poison the minds of Pakistani public and will portray Hafiz Saeed as terrorist even though JuD has not been declared as a proscribed organization,” he added.

The ban comes at a tense time for the adversarial South Asian neighbors, with an upcoming meeting between the Indian and Pakistani National Security Advisers clouded by Pakistan’s invitation to three separatist leaders from the long-disputed border region of Kashmir.

Indian films seen as anti-Pakistan have been banned in the past, but pirated versions are often easily available on DVD. 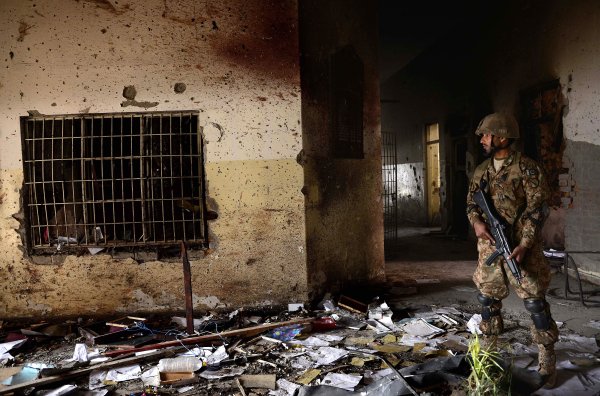 Death Sentences for Pakistan School Massacre
Next Up: Editor's Pick