The Erawan shrine, the site of Monday's deadly blast, is pictured in central Bangkok on Aug. 20, 2015
Athit Perawongmetha—Reuters
By Nash Jenkins

Thai authorities have cleared two men previously marked as persons of interest in Monday’s bombing at a shrine in central Bangkok, marking another dead end in an investigation that has so far yielded more questions than answers.

Police first identified the men in CCTV footage from the Erawan Shrine, a popular tourist attraction where a pipe bomb killed 20 people, mostly foreigners, and injured more than 100 others. The video shows them standing immediately in front of a man in yellow as he drops a black backpack at the shrine. A police spokesman confirmed earlier this week that investigators believe that man — who remains at large — “is the bomber.”

The other two men, since identified as a vacationer from China and his Thai tour guide, are not believed to be involved in the attack, police spokesman Prawut Thavornsiri said on Thursday night. The Chinese national returned home the day after the bombing; his guide presented himself to the police for questioning on Thursday, the BBC reports.

After exonerating the two men from the footage, police were quick to identify another person of interest, described only as a “woman in black.”

Unlike in past incidents of political violence, which the Thai junta has been quick to attribute to “antigovernment” populist groups, authorities have avoided premature blame or speculation. Police have concluded only that the perpetrator was likely a foreigner and did not act alone, though also poured cold water on speculation the attack being perpetrated by “international terrorists.”

Junta chief Prayuth Chan-ocha has gone on the record to dismiss the idea that members of China’s Uighur Muslim marginalized minority executed the bombing as an act of revenge — Thailand repatriated 109 Uighurs to China last month at Beijing’s request — and Chinese officials have condemned the rumor.

“Don’t you think it is hugely irresponsible for anyone to draw a conclusion without any evidence?” an unnamed spokesperson at the Chinese embassy in Bangkok told the South China Morning Post. 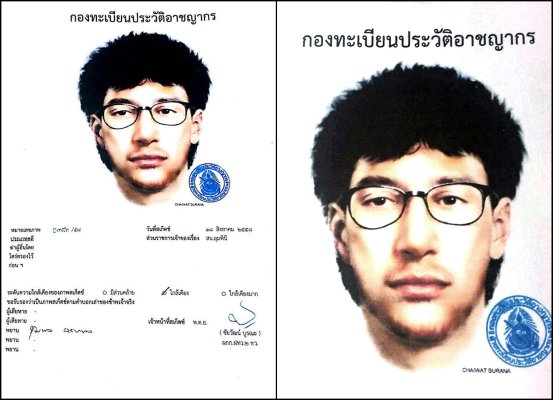