The Strange Cause of Air Pollution Decline in the Middle East

The Arab Spring may have brought a literal breath of fresh air to the Middle East, according to new research.

Instability in the Middle East in 2010-11 can be linked to a decline in air pollution, reports a study published in the journal Science Advances. The findings suggest that short-term societal changes can disrupt climate trends years in the making.

Levels of nitrogen dioxide, a toxic gas produced by car engines and power plants than can contribute to climate change, grew rapidly in cities like Damascus, Aleppo, Tehran and Cairo in the early years of the 2000s until they experienced a drop-off around the beginning of the following decade. The onset of unrest caused an economic impact that led to the decline, researchers say.

“The Middle East is a region that catches a lot of attention with political problems and upheaval and armed conflict,” said Jos Lelieveld, study author and professor at the Max Planck Institute of Chemistry, on a conference call for journalists. “We find the geopolitics and armed conflict in the Middle East has really drastically altered air pollution emissions.”

Read more: Here’s Where to Buy a House In the U.S. That Will Be Resilient to Climate Change

Researchers used satellite data to track how nitrogen dioxide emissions changed over time in the Middle East. Using that data, they evaluated nitrogen dioxide levels in conjunction with different policies and societal changes occurring at the time.

In Cairo, for instance, nitrogen dioxide emissions had grown at a rate between 5% and 7% per year in the five years up to 2010. The Egyptian Revolution that year brought with it fuel shortages and household economic problems that drove down levels of nitrogen dioxide, said Lelieveld. In Tehran, the decline in emissions was triggered as the United Nations tightened sanctions in 2010.

The researchers note some exceptions to the trend. Nitrogen dioxide levels declined in Riyadh despite relative stability in Saudi Arabia. Lelieveld attributed the decline to air quality legislation aimed at reducing pollution.

The findings suggest that it may be difficult to accurately project the human impact on climate change and the environment without considering unexpected short-term societal changes. The findings of the research were not predicted by past emissions scenarios, according to the study. “If you could predict crises that would be great, but crisis is invariably unpredictable,” said Lelieveld.

The study adds to research showing the link between air pollution and economy growth. Recent research showed that the 2008 economic collapse and the subsequent recession contributed to a decline in carbon emissions in the United States. 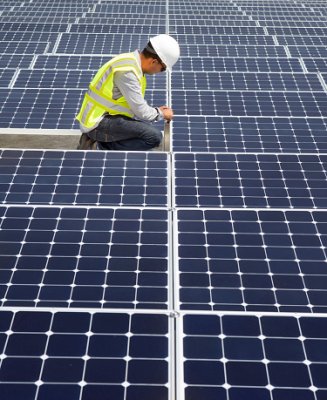 The World's First Entirely Solar-Powered Airport Is Unveiled
Next Up: Editor's Pick