Kristen Griest, left, is one of two women to successfully graduate from the Army Ranger training course
Nikayla Shodeen—U.S. Army
By Tessa Berenson

“I was thinking really of future generations of women and that I would like them to have that opportunity so I had that pressure on myself,” Griest said at a press conference Thursday about the pair’s experience and breaking a glass ceiling for women in the Army.

“Hopefully if women come to the course they can be encouraged by what we’ve accomplished,” Haver echoed.

Both women and the male Rangers agreed that gender wasn’t a factor as they completed the training. “You’re way too tired and way too hungry to honestly care,” said Staff Sergeant Michael Calderon. “We were aware of what’s going on, but at the end of the day everyone was a Ranger and it didn’t matter.”

“When your squad gets 2,000 rounds of ammo… all of a sudden the men really don’t care at all that you’re a female,” said Haver. “You’re carrying some of that and you’re sharing the load as much as anybody.”

Many of the men spoke about times that the two women had helped them carry weight or beat them in training courses, one referring to Haver as a “physical stud.”

This class of Rangers graduates Friday. 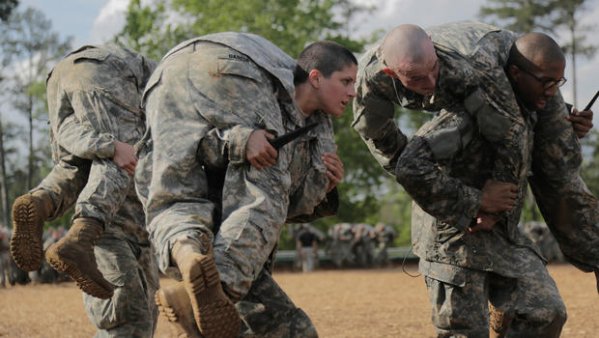 Female Rangers Should End the Debate About Women in Combat
Next Up: Editor's Pick