21 Reasons This Dog Is the Best Dog in the World

Maru, a Shiba Inu living in Japan, is everything the Best Dog in the World should be: inspirational, handsome, photogenic, friendly, and, most of all, fluffy. He is so, so fluffy.

Neither hyperactive nor aloof, Maru’s personality is truly what makes him “the world’s dog.” He’s mellow enough to cuddle with at night, fun enough to play fetch, and he isn’t above a sprightly dance or a totally spontaneous freakout. Can’t you imagine him at your feet as you read this? Don’t you want to pet him? Don’t you want to squeeze him? Don’t you love that his name is Japanese for “round”?

1. He has interspecies friendships.

Maru gets along with everybody, even goats. And horses.

2. He teaches us things.

For example, how to make “the fluffy ball.” Behold:

3. He has a panda backpack (and several other backpacks).

Why would a dog need a backpack? What would he keep in there? The answer is treats.

4. He makes the cutest howling noises.

5. He posts a goodnight photo or video for his fans every night.

He makes us feel loved.

6. He appreciates his mom.

And makes sure to thank her for helping him become “an attractive big Shiba-boy.”

He has so much love for the human who takes care of him.

9. He reminds us to hydrate.

And he sets a great example by always drinking plenty of water.

Daunted by the prospect of following an international dog? Don’t be! Maru doesn’t rely on pop culture references to be adorable and relatable. Fluffy is the global language. But when he does make a pop culture reference, it’s going to be universal and easy to understand. And bizarre and adorable.

Plus, sometimes Maru teaches us all about Japanese culture, like the annual cherry blossom festival.

Maru offers support — be it emotional or physical — to anyone in need.

12. And a good piece of exercise equipment.

Maru wants to help you be healthy.

13. He shows great enthusiasm and determination.

For example, when he digs.

14. His photos are always delightful, even when they can’t be explained.

Maru is mellow enough to put up with the cutest, strangest photo ops.

15. He lets his human bother him as much as he wants.

Maru understands that when you’re a really cute dog, people will want to bother you, and you should really just let them do it. That’s just the price of free room and board and a life of permanent leisure.

16. Maru’s life is better than yours.

What is Instagram for but enabling your daydreams while you’re stuck at work? Unless your job involves drinking from pristine mountain streams, frolicking in lush meadows, and sleeping and playing whenever you want, Maru helps you dream bigger four to five times every day.

17. He’s been featured in art galleries.

Maru is a gorgeous creature, and he works hard to maintain his beauty. This video, called “Making of Fluffy,” shows his grooming process:

Look at Baby Maru. Look at him!

20. He is extremely inspirational.

He sets goals for himself, and then he’s (rightfully) proud when he achieves them. He encourages all of us to have the same attitude.

21. He’s also extremely positive and has a perfect smile.

Maru is often wearing a big ol’ smile on his face, and encourages the rest of us to “be smile” too.

You might still be thinking that Maru is just a dog. Really, though, he’s more than that. Ono began posting photos of Maru after Japan’s devastating earthquake in 2011, “with the hope of easing people’s anxiety, even a little bit,” he writes on Maru’s website. When people responded to tell him the photos were helping cheer them up, he continued to post three photos a day, every day. Now, four years later, Maru has racked up nearly 2 million Instagram followers.

As Ono says, “Photography has the power to transcend all the barriers such as race, gender, religion, philosophy, and politics.” Photos of Maru have transcended all of those barriers, bringing joy to people all over the world. He is cute, he is smiley, he is entertaining, and he truly is the Best Dog in the World. (Also, did I mention he’s fluffy?) 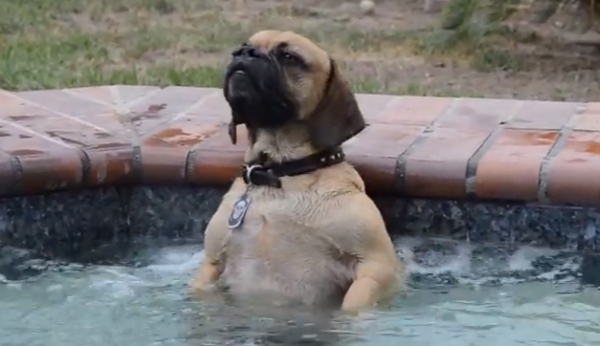 This Video of a Dog in a Hot Tub Will Solve All Your Problems
Next Up: Editor's Pick