Former US Secretary of State Hillary Clinton looks out at the audience with Vice President Joe Biden at the end of the Vital Voices Global Awards ceremony at the Kennedy Center in Washington on April 2, 2013.
NICHOLAS KAMM—AFP/Getty Images
By Aditya Agrawal

The poll also showed that Biden was as competitive as Clinton in general election match-ups in the three states against Republican contenders Donald Trump, Marco Rubio and Jeb Bush.

Peter Brown, assistant director at Quinnipiac University, noted that Clinton’s poll numbers were like a “leaky faucet” and have gone down since she entered the race. “She is now getting less than half the vote in all three states’ Democratic primaries,” he said.

Biden is reportedly considering running for president in 2016 and could make a decision by the end of summer.

Florida, Ohio and Pennsylvania are key swing states and no presidential candidate since 1960 has won without taking at least two of these three states. 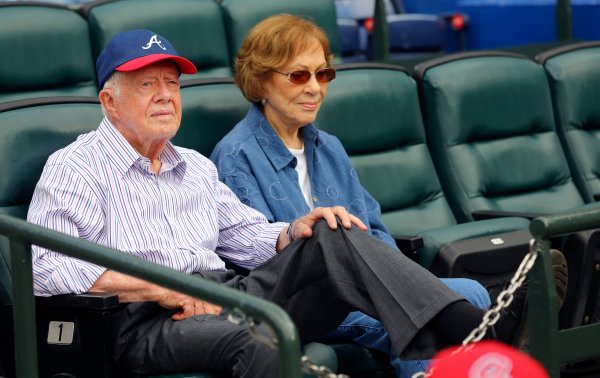 Jimmy Carter Says His Cancer Has Spread to the Brain
Next Up: Editor's Pick