Why One Woman Poses Topless in Times Square

The 21-year-old has blue-streaked blonde hair and wears skimpy black underwear, silver stilettos and—aside from red, white and blue body paint—nothing else. On a recent evening, she waved to passersby, flashed a grin, and asked, over and over: “Do you want a picture?”

“I’m having fun and making good money,” Lucky, who asked to be identified by her performance name, said as she took a break from her work. “You can’t beat that.”

Lucky is one of the desnudas, women who stroll topless in Times Square, attracting hoots and cheers from tourists and posing for photos in exchange for a tip. She’s from the South Bronx and began working as a desnuda shortly after she turned 18, drawn to the thrill of parading without clothes in one of the busiest intersections in the world.

But her livelihood, along with that of the other Times Square densudas, is now under threat. New York City Mayor Bill de Blasio and New York Gov. Andrew Cuomo both spoke out this week against the topless entertainers, objecting not to their exposed breasts but instead to allegations that they harass tourists to hand over tips.

On Thursday, de Blasio announced a taskforce to investigate the desnudas, saying he would look for “legislative and regulatory solutions.” Cuomo separately told a reporter, “This activity is illegal.”

Lucky is not too worried about a potential crackdown yet; topless women have been legally protected in New York City since 1992, and she said she never pressures any of her customers for tips.

“The mayor actually helped us, if anything,” Lucky said of the wave of publicity that has accompanied de Blasio’s attack on her trade. “I don’t know if he thought it would stop us in Times Square—it’s actually going way better than before the mayor even acknowledged us, to be honest.”

When Lucky first started as a desnuda, she worked with a handler, who took up to 70% of her earnings. She soon tired of handing over hundreds of dollars at the end of each evening shift and struck out on her own, painting her body herself and keeping all the money she earns.

She’s learned the ebb and flow of the business, taking off Mondays or Tuesdays because they’re slowest.

“After a weekend, people are pretty much broke,” she said. “Nobody wants to pay a naked girl.”

She fights back against anyone who thinks she doesn’t work hard, and said she budgets carefully to make the money last through the year.

Although Lucky is a little concerned about the “bad apple” desnudas who are more aggressive ruining the Times Square scene for everyone, she said she’s planning to just keep doing her job.

And with that, she stomped out her cigarette and stripped off her oversize “I Love NY” shirt, ready for another shift.

“I love it. I do,” Lucky said, heading back to her busy corner in the center of Manhattan. “I like the expressions on people’s faces when they see me.” 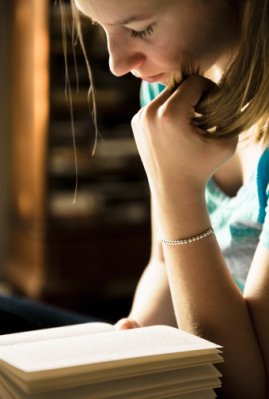 5 Books for Fans of John Green
Next Up: Editor's Pick