Even when your mom is the Queen, childhood can still be (occasionally!) silly.

A rare moment between a young Queen Elizabeth and her two laughing children, Prince Charles and Princess Anne, was shared in a tweet by Buckingham Palace Wednesday.

The picture, which dates back to 1954, shows the Queen, who was around 28 years old at the time, with an ear-to-ear smile alongside her two eldest children.

And the monarch (or royal photographer Marcus Adams) must have told a royally funny joke, as Charles, who was around 7 years old, and Anne, who was around 4, can’t control their laughter!

The stylish trio dressed up for the occasion, with the Queen in a gorgeous dress and beautiful pearls that adorably match her daughter’s delicate necklace. And it seems Anne was already following in her mother’s purse-carrying footsteps! The young princess is seen clutching a small blue bag. (Queen Elizabeth’s black handbag turned up like an honored guest in Princess Charlotte’s official christening portraits last month.)

Not to be outdone, Charles sports a pair of familiar-looking red shorts. A possible future hand-me-down to his younger brother Prince Andrew! 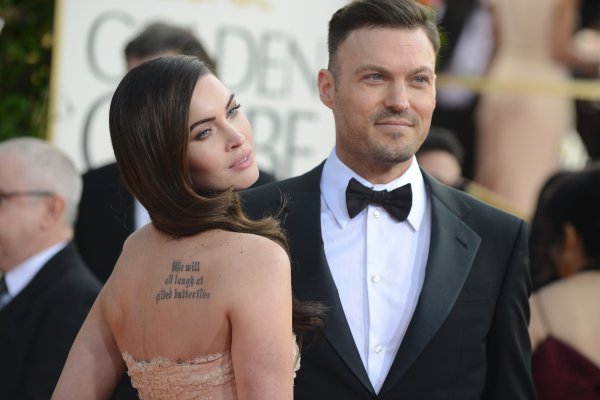 Megan Fox and Brian Austin Green Split After 5 Years of Marriage
Next Up: Editor's Pick