Inside Preparations for the Pope’s Visit

If you had to make a list of the peppiest Pope Francis cheerleaders in the U.S., it would be easy to overlook Archbishop Charles Chaput of Philadelphia. Other American clerics have much closer ties to the Pontiff, and Chaput is, even by priestly standards, measured with his words. But after an hour’s conversation, the man behind the collar loosens up ever so slightly. He points to a framed drawing of Mary, “the Undoer of Knots,” on his desk and notes that the picture was a gift two decades ago from a then no-name Archbishop in Buenos Aires, Jorge Bergoglio.

It’s a reminder that Chaput’s biggest test is just five weeks away, when Bergoglio–now Pope Francis–will visit the City of Brotherly Love for the World Meeting of Families, a six-day Catholic gathering to celebrate marriage and family life held every three years. Millions of people are expected to come celebrate a Mass with the Pope on Sept. 27–the biggest outdoor Mass of Francis’ first-ever trip to the U.S. “His presence here is what is going to make it so successful,” Chaput, 70, says. “We hope that the personal energy and hope and love that the Pope has and embodies will become part of our local church in an extraordinary way because of his visit.”

That may be something of an understatement. The Philadelphia archdiocese has spent the past decade reeling from clergy-sex-abuse and financial scandals, and Chaput has devoted the past four years to trying to turn the page. Now he is putting the finishing touches on a festival designed to show the nation and the world that the American Catholic Church has shed its sins and is ready for the future. It is a tall order for any priest, especially one who has publicly called abortion a “killing spree” and accused the University of Notre Dame of “prostituting” its Catholic identity by inviting President Barack Obama to speak. And yet Chaput is trying.

As the first Native American Archbishop–a member of the Prairie Band Potawatomi Tribe and a Westerner plopped down in one of the oldest cities in the East–Chaput has seen the Catholic Church from both sides. Though he may not be as public a face as some of America’s 35 Archbishops, he is an almost perfect representation of the pressures and cross pressures under way in the U.S. Catholic Church today. Caught between the church’s ancient mission of helping the marginalized and the need to unravel its recent history of child abuse, Chaput is working to revitalize a diocese that is still picking up the pieces. The streets of Philadelphia are not the beaches of Rio, where millions of young people swelled to meet Francis in 2013, thankful that he was elevating their voices to the world stage. For years, Philadelphia has been on the stage for all the wrong reasons. Until now. There’s a reason they call resurrection a miracle.

For Philadelphia, Joy over the Pope’s arrival is reaching Roman levels. Public schools will close for three days during the festivities. The Franklin Institute is importing a mini-Vatican museum from Rome. The sandwich shop Potbelly’s is already selling a special-edition PopeInPhilly milk shake, made of vanilla ice cream and shortbread butter cookies. Democratic Mayor Michael Nutter announced a security perimeter so large that officials in neighboring New Jersey are planning for people to walk up to seven hours to catch a glimpse of the Pontiff. The NFL, at Chaput’s request, ensured that the Eagles would have an away game during the downtown papal Mass. Security forces will include just about everyone from the Philadelphia police and the FBI to Italian forces and the Vatican’s Swiss Guard. The federal government has already designated Francis’ Philadelphia visit as a National Special Security Event.

And yet for Francis, visiting Philadelphia started as something of a fluke. It was Pope Benedict XVI who had planned to visit the city for the World Meeting of Families, and when he stepped down 2½ years ago, Francis inherited his existing plans along with their existing problems. Philadelphia, a behemoth of American Catholicism, was one of the worst offenders in clerical-abuse scandals that threatened to ruin the church’s reputation everywhere, but especially in the U.S. In 2005 a county grand jury reported that leaders of the archdiocese, including two Cardinals, had concealed sexual abuse by more than 60 priests over four decades, with victims numbering in the hundreds of children. A second grand-jury report in 2011 accused the archdiocese of still not stopping the sexual abuse. Five months later, Philadelphia Cardinal Justin Rigali stepped down when Benedict tapped Chaput–then Archbishop of Denver–to clean it all up.

It was one of the more awkward transitions in church history. Two days before Chaput was installed, high school teachers of the extensive Philadelphia Catholic school system went on strike over contract disputes. Soon after, Cardinal Anthony Bevilacqua, the city’s Archbishop emeritus accused by the grand jury of covering up abuse, died one day after he had been judged competent to testify in a high-profile abuse trial. Weeks later the archdiocese’s chief financial officer was arrested for stealing nearly $1 million from the church’s accounts. The mess made it all the more likely that the public would perceive Benedict’s arrival at the World Meeting of Families as a giant anti-gay-marriage pep rally hosted by an out-of-touch and hypocritical church.

Chaput opted to tighten the reins. He began to remove priests who had been suspended after the grand-jury report. He sold the Archbishop’s residence–a 12,600-sq.-ft. stone mansion, complete with a six-car garage–for $10 million and moved into the seminary to prepare for the announcement that he had to close schools and parishes to address a huge budget shortfall. He shuttered 49 schools, consolidated nearly 20 offices and transitioned the 117-year-old Catholic Standard and Times newspaper to digital-only publication. He sold the priests’ $6 million oceanfront beach retirement home near Atlantic City, N.J. Not everyone was happy with the changes, but under Chaput’s new CFO, Timothy O’Shaughnessy, the core operating deficit dropped from $17.6 million in fiscal year 2012 to $3.1 million last year.

“I moved from a church that was focused on mission to one that was focused on maintenance and survival,” Chaput says, “and that does influence you in terms of the skills that you have–in one case, the skills are encouraging newness and creativity, and the other it is being careful and cautious and cutting back, but for the purpose of eventually moving from maintenance to mission.”

As Francis touted the role of laypeople and women in global Catholicism’s future, Chaput followed suit, giving more say to the people in Philadelphia’s pews. He created a 30-member advisory group to guide him on pastoral challenges. “There is an anxiousness on the part of the people to do something and contribute and claim the church as their own,” Chaput says. “My role as a bishop is to foster initiatives rather than to take all the initiative and to foster creativity on the part of the people of the church and not to be the source and center of all that initiative and creativity myself.”

Chaput also put women in charge of the World Meeting of Families. Donna Crilley Farrell, the archdiocese’s longtime communications director, who steered the diocese through the abuse years, is the event’s executive director, and 70% of her 65-person team are women or minorities. Mary Beth Yount, a theologian and mother of four children under age 10, is in charge of the event’s content and speaker selection. Though she has picked many social-conservative voices, her lineup, unlike those at previous meetings, includes non-Catholic religious leaders such as Muslim author Suzy Ismail, Protestant evangelical megachurch pastor Rick Warren and Elder D. Todd Christofferson from the Church of Jesus Christ of Latter-day Saints. Presentations will be made in six languages, and there will be sessions about the elderly and singles. “I don’t want people to think it is only for certain types of families,” Yount says. “All are welcome.”

And, in quiet recognition that modern family life is complicated, Ron Belgau, an openly gay man who has chosen to be celibate, will lead a session with his mother. They are designing their talk around Francis’ teaching to encounter people first, even before theological principles intervene. Belgau says he will address myths that some Catholics have, like the idea that sexual orientation is a choice or unrealistic hopes of orientation change–a far cry from the more historic Catholic language of gays and lesbians being “intrinsically disordered.” “I do not think it is as likely that I’d have been invited to speak at the World Meeting of Families if Benedict were still Pope,” says Belgau. “The shift to the more holistic focus on the person and less of a focus on the politics isn’t a night-and-day shift from Benedict to Francis, but it is an undeniable shift in tone.”

None of this makes Chaput less of a conservative or Francis’ church less doctrinaire. Two weeks after the Supreme Court legalized gay marriage nationwide, Chaput commended a local Catholic school for dismissing a gay teacher who had been married and working there for eight years. “They’ve shown character and common sense at a moment when both seem to be uncommon,” he said in a statement. When the recent Planned Parenthood video exposés hit the Internet, he slammed abortion as “a uniquely wicked act.” In mid-August, his archdiocese put the brakes on an unsanctioned LGBT Catholic conference that outside equality groups were planning to host at a local parish.

It would be a mistake to expect Francis to upend any of these theological commitments, even if his words are less sharp than Chaput’s. He is not going to crack the door for women to become priests or gays to marry, in Philadelphia or anywhere else during his five-day trip to the U.S. When he meets with immigrants to discuss religious freedom on Philadelphia’s Independence Mall, he will more likely address global Christian persecution than wade into U.S. legislative fights over birth control’s place in health care reform. When he visits the Curran-Fromhold Correctional Facility, Philadelphia’s largest prison for men, he will be every bit as pro-life in his stance against the death penalty. And Chaput will be at Francis’ side at every stop.

But what will happen is that the Catholic Church will try to reset its place in the lives of families hoping for renewal. Francis appointed Chaput to the relatively small U.S. delegation for the Synod of the Bishops on the Family, which meets this October at the Vatican. There, the tensions over issues like communion for the divorced and remarried will brush against economic divides between rich and poor families.

Those battles are already taking shape in Philadelphia. Chaput’s team set aside $2 million for scholarships so that two families from every diocese in Mexico, one family from each of the poorest dioceses in the U.S. and Canada, and one family from every bishop’s conference in Latin America and the Caribbean can attend. “They will have a voice, and not just have ears but have a voice in the kind of discussions that are going on,” Chaput says. “It’s not just to have a show, although we want people to see things. It is to change people’s lives.” 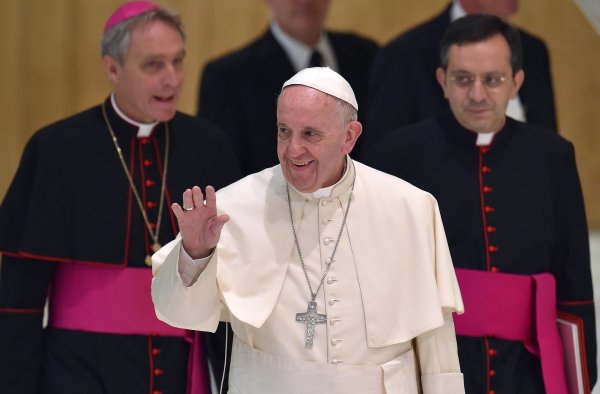 Pope Francis Will Speak From Lincoln's Gettysburg Address Lectern
Next Up: Editor's Pick