Out with a memoir, The Face That Changed It All, the veteran supermodel reflects on her career and on coming forward about Bill Cosby.
Paras Griffin—Getty Images
By Daniel D'Addario

You became one of the highest-profile Cosby accusers when you alleged last year that the comedian had drugged you. How did you decide to speak out?

Many people have applauded you. What is the feedback that we don’t see?

It totally changes your life. It’s not that this coming forward is awful, but it’s not 100% positive. Nobody wants to be judged and criticized, and that’s what comes along with it. But what stands out for me is that I found a strength in myself and a part of my soul. My soul aged gracefully. It’s just such a grace that has happened from this.

Your book is candid, and you had a reality show. Are you comfortable sharing this much with the public?

Last night I received a hard copy of the book, and I’m like, What did you do? What were you thinking? We’ll see. Interview me in a few months.

Is the modeling world uniquely competitive?

That’s in every industry, isn’t it? Competition and rivalry are good. It brings out the best in us.

How does posing for photos change as you age?

When you’re 103 pounds and 18 years old, you can give them every angle in the world. But things change, and that’s the wonderful part about life. It would be really boring to try to stay exactly the way you are with the same old hairstyle that you had back in high school.

You write about your rivalry with Iman. Do you regret not helping each other more?

What do you make of the fashion industry’s response to underweight models?

In my era, we were super-skinny, but people got inspired by the fashion. They didn’t want to look like us. Now models have a responsibility to send out the correct message. The scrutiny has to continue.

You dated Arthur Ashe and Mike Tyson. Did life in the public eye affect your romantic choices?

Obviously, from my book, I didn’t do so good. I made some mistakes. Arthur Ashe and I–our connection was manufactured. But in the other cases, I don’t tend to go after someone that’s going to bring me more celebrity or fame. I’m not that ambitious.

You have a hair-extension line. How has it been running a business?

Really difficult. The learning curve was challenging. I’ve found that I’m smarter than I ever thought and that it’s exhilarating to build something brick by brick. Modeling is instant gratification. You see the picture. You get your check.

When do you feel most beautiful?

I feel the most beautiful when I’m really speaking my truth in my soul. I don’t look in the mirror a lot, but right now I’m looking in the mirror and I’m going, Whoa! You look good. 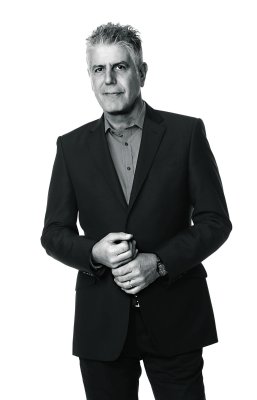 10 Questions With Anthony Bourdain
Next Up: Editor's Pick