Thai authorities say they have identified two more suspects in Monday night’s bombing of a crowded Bangkok shrine, citing the same CCTV footage that led police to issue an arrest warrant for an “unidentified foreign man” on Wednesday.

In the footage, two men, dressed respectively in red and white, appear to be standing close to the primary suspect as he drops a black backpack at the Erawan Shrine 15 minutes prior to the explosion. Police have expressed certainty that the man in the yellow T-shirt who dropped the bag was indeed responsible for the blast, which killed at least 20 people and injured more than 120 others. The proximity of the two other men to the suspect — seemingly setting a screen for him while he deposited the bag — has prompted authorities to name them as persons of interest.

Police have offered a reward of 1 million baht, or around $28,000, for any information about the perpetrators. A sketch of the primary suspect released on Wednesday afternoon presents him as a bespectacled young man whom police have described as “Caucasian, Arab or mixed race.” According to a Bangkok motorcycle taxi driver who purportedly picked him up a quarter-mile from the blast site, the man appeared to speak neither Thai nor English.

“He had a conversation on the phone,” said the driver, identified only as Kasem, according to the Bangkok Post. “I don’t know what the language is.”

The driver said he dropped the man at Lumpini Park, a popular public green space less than a mile from the Erawan Shrine, after he was shown the address written in English on a piece of paper.

Though authorities now appear confident in the assumption that the perpetrator is a foreigner, they have declined to speculate further, otherwise only conceding that he did not act alone. On Thursday, Colonel Winthai Suvaree, a junta spokesperson said that the bombing was “unlikely to be linked to international terrorism.”

Thai junta chief Prayuth Chan-ocha publicly discredited reports that the attack was the work of Uighur Muslim extremists seeking retribution against the junta. Last month, Thailand repatriated 109 Uighur refugees to China, where the minority alleges repression. Several terrorist attacks targeting civilians have been launched by Uighur extremists over the past two years.

“If they had done it, they would have come out and declared their responsibility by now,” Prayuth said on Wednesday, the Bangkok Post reported. “But it’s been three days and there is no one claiming responsibility. If they come out now, I won’t believe it is them.”

Prayuth has also discouraged international parties from involving themselves in the investigation, calling it “a breach of sovereignty,” though Reuters reports that Interpol have been asked for assistance in tracking down the suspects. Certainly, as more than half the dead were foreign nationals, and with Bangkok the world’s second most visited city last year, international interest has been intense.

Following the explosion, at least 23 nations issued travel advisories for Thailand, urging their citizens to exercise caution if visiting the country. The news is yet another blow to Thailand’s vital tourism industry, estimated to contributed some 10% of the local economy, and which was slowly recovering after last year’s military coup. 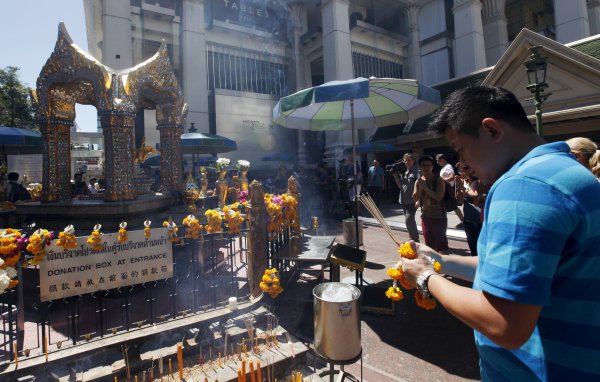