When Martin Schoeller scrolled through the 28 close-up portraits he had taken of Donald Trump, he was struck to see that they were all identical. “Every frame was the same,” Schoeller says. “Mr. Trump knows exactly how he looks, and he strikes one pose and doesn’t move.”

It wasn’t the first time that Schoeller, an award-winning portrait photographer and frequent TIME contributor, had worked with Trump. They first met in 2004 for a Fortune cover article, so he knew what to expect when he was asked to photograph the frontrunner in the 2016 Republican presidential primaries for this week’s magazine cover.

“He’s very difficult to photograph,” says Schoeller. “If you ask him to look up a little bit, he says no or he just doesn’t do it. He literally has one angle. If I ask him to smile, he puts on a big grin and then he goes back to his Zoolander ‘blue steel’ look. And the ‘blue steel’ stays for as ever long as it takes to get the photograph.”

This time, however, Schoeller wanted to try something different. “When I get an assignment, I do my research and try to figure out what kind of picture would make the most sense given who the person is and what they’ve been up to,” he says. And with Trump running for president with the slogan “Make America Great Again”, Schoeller thought about adding a bald eagle – the U.S.’s national emblem – to the photo. “Mr. Trump liked that idea,” says the photographer. “I thought he might be open to it considering he’s a man who loves attention. He likes controversy, and he likes to be in the spotlight.”

The 27-year-old American bald eagle, named Uncle Sam, was flown in from Texas by master falconer and wildlife rehabilitator Jonathan Wood – and brought to the 25th floor of the Trump Tower in mid-town Manhattan. “It’s hard to plan what animals will do,” says Schoeller. “There’s not much training you can do with a wild bird and Mr. Trump was a little hesitant holding the bird, so it was very tricky to get the bird to [stay] on his hand.”

Wood, the bald eagle’s owner, felt the shoot went well – and he would know. For the past 20 years, after Uncle Sam was hit by a car in 1994 and was deemed “non-releasable” to the wild, Wood has been crisscrossing the country with it. “I’ve done a lot of educational programs in schools with that bird,” he says. “He’s been in movies, television shows and commercials. Millions of people have seen him.”

For Wood, it made sense to pair Trump with Uncle Sam. “Donald Trump is an icon, and this bald eagle is an icon.”

Martin Schoeller is an award-winning portrait photographer based in New York City. 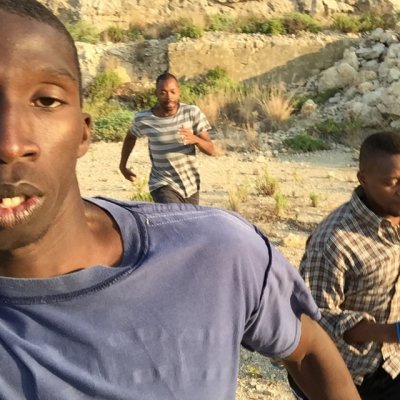