The two female soldiers who will make history this week as the first to graduate from the Army’s grueling and legendary Ranger School have been identified as Capt. Kristen Griest and 1st Lt. Shaye Haver, Washington Post reports.

While Griest, a military police officer from Orange, Connecticut, and Haver, an Apache helicopter pilot from Copperas Cove, Texas, have not previously been identified by the Army, the Washington Post and other outlets were able to name the women after observing Ranger School training multiple times this year.

The two women, both in their 20s, proved their strength at the famously challenging school designed to create elite combat leaders. They withstood exhausting hikes, sleepless nights, little food and simulated combat exercises to test their tenacity, teamwork skills and response time.

This Friday, Griest and Haver will become the first female soldiers in history to graduate from the course in Fort Benning, Georgia, where they’ll receive the coveted Ranger Tab alongside their male counterparts.

Griest and Haver are among a test group of women who attended the first coed course, which began in April with 381 men and 19 women, but ended its run with only 94 men and two women. One woman currently remains in the program and is still attempting to complete it.

Although the course runs 62 days, it appears it took Griest and Haver longer to complete it. “These two women began the course April 20. They were ‘recycled’ at different phases of the course, but have been at the school since that date,” Army spokeswoman Lt. Col. Jennifer Johnson told PEOPLE on Wednesday. (A recycled course refers to one that’s been redone.)

Haver graduated high school in Texas in 2008 and was a cross country runner. Washington Redskins’ quarterback Robert Griffin III was one of her classmates, according to a story in her hometown newspaper, the Post reports. She graduated from the U.S. Military Academy at West Point, New York, in 2012.

Griest, also a West Point graduate (class of 2011), has run competitively as well. Last December, she was the distinguished honor graduate in a pre-Ranger School course run by her unit, the 3rd Brigade Combat Team, 101st Airborne Division, according to the unit’s Facebook page.

The graduation of Haver and Griest will mark a major milestone in the military’s efforts to integrate women into positions that have not yet been allowed to serve. And even though the ceremony is just days away, the class is still training up until Friday.

“The class is now back at Ft. Benning. They are graduating, but they are still in training,” a source at Ft. Benning tells PEOPLE. “I just saw the class. They all look tired. They look like they’ve been through the wringer. This is a significant achievement for everyone.”

Despite the monumental accomplishments, the new female graduates won’t be allowed to try out for the elite 75th Ranger Regiment. “The women who successfully completed and graduate from the Ranger course will receive a certificate of completion and be awarded and authorized to wear the Ranger Tab. They will return to their unit,” Johnson told PEOPLE on Tuesday. “They will not go on to serve in a Ranger Regiment.”

Last week, retiring Army Chief of Staff Gen. Raymond T. Odierno said that any soldier who remained in Ranger School – male or female – can meet the standards the service has established for a job and should be able to serve in it, he told the Post.

Odierno expects the Army will start another Ranger School course in November, which it will again study to decide if the course will be open to women permanently.

— With reporting by Susan Keating 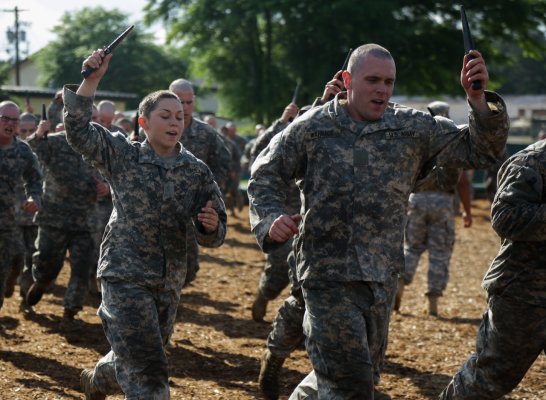 The Lone (Female) Rangers
Next Up: Editor's Pick