As the busy Bangkok commercial district impacted by Monday night’s bombing cautiously returns to a semblance of normalcy, with even the crater sunk by the blast already concreted over, authorities continue to hunt the perpetrators of the attack that killed at least 20 people and injured around 140.

Thai police said Wednesday that their primary suspect — a man in yellow spotted on CCTV footage dropping a black backpack at the blast site — did not act independently, and that those who executed Monday’s blast were likely also responsible for an attempted bombing of Bangkok’s Sathorn pier on Tuesday.

“He didn’t do it alone for sure. It’s a network,” said Somyot Poompanmoung, commissioner general of the Royal Thai Police.

Speaking to reporters on Wednesday afternoon, Thai junta chief Prayuth Chan-ocha attempted to coax the suspect out of hiding with a curious appeal. “If the person wants to be safe, he should turn himself in. Officials will find a legal way to provide him with safety,” he said. “It’s better than living in hiding. It would make his life miserable.”

The Bangkok Post reports that police are investigating a possible link to Uighur Muslim militants, who may have sought revenge for Thailand’s decision last month to repatriate 109 Uighur refugees to China, where the minority claims marginalization and associated abuses. However, officials have refused to speculate publicly, only venturing that Thai nationals may have been involved. Police said they have detained several foreigners for questioning, including an Australian-born model currently living in Thailand, but the effort has not yet furthered the investigation.

Police spokesman Prawut Thavornsiri tweeted a sketch of the suspect on Wednesday afternoon, after noting that a reward of 1 million baht, or more than $28,000, awaited anyone who could provide information on the perpetrators.

By Wednesday morning, residents of Bangkok were placing flowers, incense and notes of condolence at the reopened Erawan Shrine, where on Monday the perpetrator placed a pipe apparently stuffed with 3 kg of TNT. Bangkok is the world’s second most popular tourist destination, and the shrine is one of its most frequented attractions, particular for Asian visitors. (Half of those killed were foreigners.)

The Erawan Shrine sits at the corner of the bustling Ratchaprasong intersection, which some call the city’s equivalent of Times Square in New York City. Numerous retail facilities in close proximity to the explosion — including CentralWorld, the world’s sixth largest shopping mall — resumed operations within a day, in spite of minor structural damages sustained in the blast.

Nearby hotels remained open following the attack, deemed the worst in the Southeast Asian nation’s recent history by General Prayuth, though some managers say stricter security measures have failed to assuage anxious tourists.

“We have provided a complimentary hotel limousine, because no one wants to take public transit to this area,” Khemwanta Thangon, the marketing and communications manager at the Grand Hyatt Erawan Bangkok, tells TIME. “But what we understand is that guests have chosen to stay somewhere near the airport instead.”

The Grand Hyatt, located around 120 m from the shrine, has closed all but two of the hotel’s entrance points, where Khemwanta says security personnel are inspecting the luggage of guests and staff members as they enter.

It is too early to tell if or how this week’s violence will impact Thailand’s vibrant tourism industry, which reliably sustains around 10% of the country’s otherwise unsteady economy. In Hong Kong, the home of two tourists killed on Monday, the government has encouraged those traveling Bangkok to “adjust their travel plans.” Melissa Sweeney, a spokesperson for the U.S. embassy in Bangkok, wrote in an email to TIME that the embassy is “continuing to monitor the situation” and will keep U.S. citizens in the country informed of any developments. To the embassy’s knowledge, no U.S. citizens were killed or injured in the explosion.

Paul Quaglia, a security analyst based in Bangkok, said he expected international pressure to galvanize the investigation. “Unlike previous incidents, this one left 20 people dead, many of whom are tourists, and so foreign governments are going to be demanding an answer,” he tells TIME. 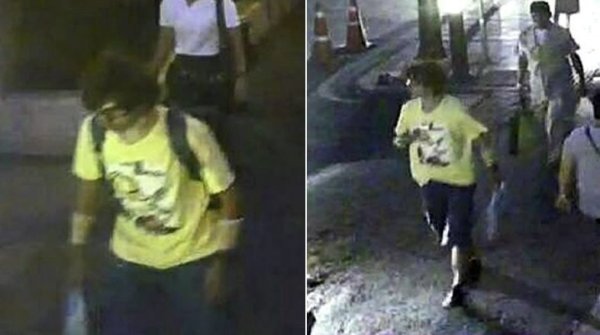 Police Identify Suspect in Bangkok Bombing
Next Up: Editor's Pick