Teenagers who use e-cigarettes may be more likely to report using conventional tobacco products like cigarettes, hookah and cigars, new research suggests.

Researchers looked at 2,530 students from 10 Los Angeles public schools. They asked the teenagers about their smoking and vaping activities and found that teens who had used e-cigarettes were more likely to report using tobacco products over the next year compared to teens who had never used e-cigarettes. The findings were published Tuesday in the journal JAMA.

The researchers cannot conclude from their data that using e-cigarettes leads a teen to use other tobacco products. More research is needed to determine if the link is causal. However, they suggest it’s unlikely that the number of teens who use both e-cigarettes and other tobacco products can be entirely attributed to teens already smoking and then trying e-cigarettes later on. “These results raise the possibility that the association between e-cigarette and combustible tobacco use initiation may be bidirectional in early adolescence,” the authors write.

MORE: E-cigs Are the New Cool Thing for Teenagers

Some view e-cigarettes as a healthier alternative to tobacco. However, both e-cigarettes and tobacco products contain nicotine, which is addictive, and some research shows that e-cig flavors are dangerous and that the devices, too, produce potentially dangerous byproducts when heated. Since data suggests that teenagers are increasingly using e-cigarettes, some public health experts are worried.

“Adolescents may be especially susceptible to develop nicotine addiction after e-cigarette exposure because their brains are still developing and are particularly sensitive to nicotine,” writes Dr. Nancy A. Rigotti of Massachusetts General Hospital and Harvard Medical School in a corresponding editorial.

The researchers also note teens may be more likely to use e-cigarettes before other combustible tobacco products due to a perception that they are not harmful or addictive. The fact that e-cigarettes are sold in different flavors can be attractive to young people, the authors argue, and in some cases it remains easy for teens to get access to them due to a lack of regulation. 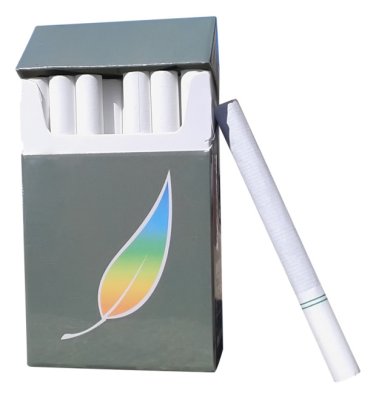 Green Tea Cigarettes Are Now a Thing
Next Up: Editor's Pick