Thai junta chief Prayuth Chan-ocha said Tuesday that authorities had tentatively identified a suspect in connection to Monday night’s bomb blast at a shrine in central Bangkok that killed at least 20 people — including several tourists — and injured 140 others.

The bombing, which Prayuth called the “worst ever attack” on Thailand, occurred around 7 p.m. at the Erawan Shrine, a Hindu religious site and popular tourist destination in the bustling commercial district of Ratchaprasong. Local police told the Bangkok Post that 3 kg of TNT had been stuffed into a pipe and placed within the shrine area, which was bustling with tourist traffic. At least three Chinese nationals were among the dead, along with other tourists from Indonesia, Malaysia and Singapore.

Somsuan Pawake, a 35-year-old chief security guard for the Ratchaprasong area, tells TIME that he’d never witnessed such carnage. “I heard a series of screams and human flesh scattered around — even a head,” he says. “There were a lot of dead bodies lying on the street. I now fear for my life.”

No individual or group has publicly claimed responsibility for the bombing, and while authorities say they are actively hunting the suspect identified on tape, more questions than answers remain. Political unrest in Thailand is endemic and sometimes violent, but experts say Monday’s attack was unprecedented in its intended devastation. On Tuesday, a separate grenade attack was reported at Bangkok’s Taksin Bridge, though no casualties were reported.

“Political violence in Thailand in the last 10 years has been designed to limit casualties, particularly among foreigners. This is the opposite, and that’s troubling,” Paul Quaglia, a Bangkok-based security analyst, said by phone Tuesday morning. “It was intended to attack a crowded area. It was intended to inflict casualties.”

Long-standing political tensions between Thailand’s pro-monarchy, pro-military old guard and the country’s growing populist camp have escalated over the past 15 months, since a military coup d’état — the country’s second in less than a decade — overthrew the democratically elected government of Prime Minister Yingluck Shinawatra. Her ousting and Prayuth’s increasingly authoritarian junta have enraged the populist pressure group known as the Red Shirts, which first coalesced in 2006 to decry the successful military ousting of Yingluck’s brother, exiled former Prime Minister Thaksin Shinawatra.

Prayuth’s administration was quick to link the Red Shirts to a recent string of minor bomb attacks in the country. In the wake of Monday’s bombing, however, several security experts rejected any premature assumptions, noting that the country’s Muslim insurgents located in the far south have only on the rarest occasion launched attacks outside of their own provinces, and that the pointedly political Red Shirts have never committed a mass casualty attack.

“Other targets would have been available in Thailand — military venues, military officials themselves — if they wanted to make a point about the government,” Quaglia said.

Thailand may have made other enemies, though. Last month, the government deported nearly 100 Uighur Muslims back to China, from where they had fled, at the request of the Beijing government. The move sparked an international outcry from human-rights groups and protests in Turkey, where many identify with the Turkic-speaking minority that claims marginalization and abuses in their homeland in China’s westernmost Xinjiang autonomous region. There, an insurgency has been waged targeting China’s Han majority, including terrorist attacks against civilians.

Certainly, the bombings are likely to have a chilling effect on Thailand’s key tourism industry. Self-styled as the Land of Smiles, the nation welcomes 25 million foreign visitors each year, yet the recent attack will only add to fears of instability following the May 22, 2014, putsch and subsequent introduction of martial law. (This was recently repealed and replaced with an equally draconian new security law.)

Francesco Fabiano, 40, from Italy, was lounging by his hotel’s swimming pool when Monday’s explosion shattered the evening calm. “We saw debris flying in the area and we could see people running around the street,” he says. “We are lucky. I am still with my wife and two children. However, I think the Thai government needs to work a lot now. They need to come up with safety measures for tourists.”

Michael Montesano, a co-coordinator of the Thailand Studies Program at Singapore’s Institute of Southeast Asian Studies, expressed concern that the junta would use Monday’s attack as “a pretext for increased repression.”

“This sort of violence in the center of Bangkok only contributes to the sinister atmosphere of military dictatorship and intimidation that now prevail in Thailand,” Montesano tells TIME in an email.

— With reporting by Mallika Panorat / Bangkok 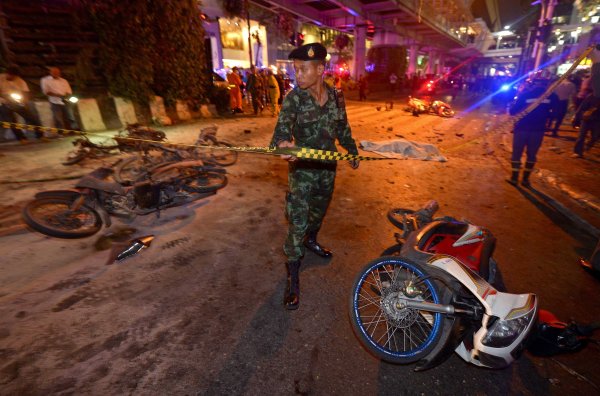 Witness the Aftermath of Bangkok Shrine Explosion
Next Up: Editor's Pick