Josh "The Fat Jew" Ostrovsky at the 2015 Nike Basketball 3ON3 Tournament on Aug. 7, 2015 in Los Angeles.
David Livingston—Getty Images
By Nolan Feeney

Josh Ostrovsky, better known on the web as the Fat Jew, made TIME’s list of the most influential people on the Internet this year because brands were shelling out big bucks to get the attention of his audience. The only problem is, as TIME noted, comedians have long accused Ostrovsky of ripping off their jokes and posting them without credit.

The backlash against him has renewed since last Thursday, when the 30-year-old signed a deal with CAA, one of Hollywood’s top talent agencies. A man named Kevin Kelly assembled a Storify post featuring fifty jokes Ostrovsky has posted without attribution alongside their sources, while comedians such as Michael Ian Black and Paul Scheer have spoken out against Ostrovsky on Twitter. One Facebook post calling Ostrovsky out, from Maura Quint, was widely circulated:

The backlash appears to be making an impact now. Comedy Central confirmed to the website Splitsider that it is no longer developing a project with Ostrovsky, though the network told Entertainment Weekly that the it fell through “several months ago.” A rep for Seamless, which featured Ostrovsky in an marketing campaign, told Death and Taxes that the company has “no current plans to work with him in the future” but that it was “unable to comment” on the plagiarism accusations. 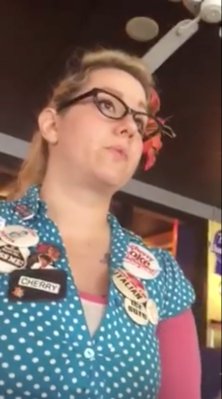 The Internet Is Obsessed With This Video of a Rude Waitress
Next Up: Editor's Pick