Carly Fiorina waits to be introduced before speaking during a campaign event at the Jewish Federation of Greater Des Moines in Waukee, Iowa on Aug. 16, 2015.
Joshua Lott— Reuters
By Philip Elliott

White House hopeful Carly Fiorina said Monday it’s time to be realistic about the pending deal with Iran over its nuclear ambitions: the current parameters are likely to be put into place and there’s nothing to be done until President Barack Obama leaves office.

“I earnestly hope that Congress will vote down this deal,” she said. “But we should be realistic. The rest of the world has moved on.”

The Republican former tech executive told voters at the Iowa State Fair that she would go to work negotiating a new deal if she were elected President. Fiorina said the United States could put pressure on Iran to return to the negotiating table by limiting its ability to move money internationally, as well as lobbying other world leaders to join Washington in pressuring Tehran.

But in the coming weeks, there’s not much anyone can do, she lamented. “New deal, new deal,” she said, taking questions from voters who wandered between stalls of deep-fried food and livestock.

She said her message to Iranian leaders would be direct if elected President: “Until you open every military and every nuclear facility to real anytime, anywhere inspections, the United States of America, without anyone’s permission or collaboration, will make it as difficult as possible for you to move money around the global financial system.”

Fiorina, a never-before-elected candidate and the lone woman seeking the Republican nomination, has captured voters’ interest during this summer lull. A polished performance during an undercard debate helped her poll numbers climb, and she is spending much time camped out in early nominating Iowa and New Hampshire.

More voters are starting to give her a listen. And they’re finding the former Hewlett Packard CEO’s conservative message includes a pragmatism not found in some of her rivals’ promises. For instance, she said it is unlikely Congress can derail the agreement with Iran and renegotiating it with the current partners seems unrealistic. “China and Russia have never been negotiating on our side of the table,” she said.

China, Russia, France, the United Kingdom, Germany and the United States negotiated the deal with Iran. Under the deal, Iran will get relief from sanctions and regain access to international oil markets, which will bring it a windfall of about $100 billion. In exchange, Iran must dispose of most of its low-enriched uranium, stop efforts to produce or acquire more nuclear fuel and consent to inspections. The deal is expected to block Iran from obtaining the technology needed to build a nuclear weapon for at least a decade. 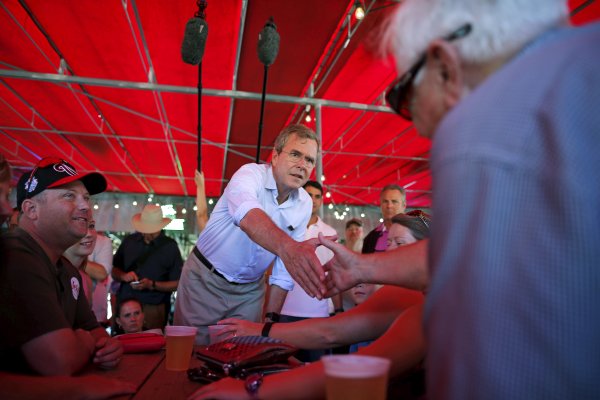