Soldiers of the People's Liberation Army antichemical-warfare corps work next to a damaged firefighting vehicle at the site of the Aug. 12 explosions at Binhai new district in Tianjin, China, on Aug. 16, 2015.
China Daily/Reuters
By Hannah Beech / Shanghai

A harmless-looking white powder, sodium cyanide is lethal if ingested or inhaled. But the hazardous compound is useful in extracting gold from mines, among other things. China is now the world’s largest consumer of sodium cyanide, and domestic production has skyrocketed. On Monday, He Shushan, the deputy mayor of Tianjin, announced that the Aug. 12 warehouse blasts in the northeastern Chinese port city — which have killed at least 114 people and left 70 others, many firefighters, missing — damaged some 1,800 containers loaded with toxic chemicals. Hundreds of tons of sodium cyanide were stored in the Tianjin warehouse complex, less than 1 km from upscale residential areas.

On Sunday, residents within a 3 km radius of the blast site were evacuated, as authorities confirmed that sodium cyanide had been found nearby. Chemical-warfare troops have been dispatched. The fear is that rain — thunderstorms are expected later on Monday — could spread lethal materials stored in the warehouses, including sodium cyanide and calcium carbide, into a city of 14 million.

Inclement weather and volatile chemicals notwithstanding, the official line in China is one of control and confidence from the top levels of officialdom. On Sunday, China’s Premier Li Keqiang, along with a team of identically dressed officials in white button-down shirts and black trousers, visited the blast site and honored the firefighters who had died on duty. The central government has dispatched investigators to determine if dereliction of duty could have led to the apocalyptic explosions. Tianjin Deputy Mayor He said that any sodium-cyanide residue in the perimeter of the blast site would “mostly be cleaned up” by Monday evening.

But such assurances are hardly of comfort to relatives of the missing, who wonder why the government has done little to update them on their loved ones. Even families of firefighters have taken to social media to complain that local officials have neglected to keep in contact with them. Residents of high-end Tianjin apartment buildings, now shattered and shaken, have protested that, unbeknownst to them, they were living dangerously near warehouses storing toxic chemicals. Chinese law forbids the storage of such poisonous materials less than 1 km from residential neighborhoods. Why were bags of sodium cyanide allowed to be stacked so close by?

The People’s Daily, the Chinese Communist Party’s mouthpiece, reported over the weekend that Rui Hai International Logistics, the firm that owns the warehouses where the blasts took place, may have been smuggling chemicals. An employee of Hebei Chengxin Co., one of China’s largest producers of sodium cyanide, confirmed to TIME on Monday that the firm stored the compound at Rui Hai’s warehouses before sending batches overseas to foreign buyers. The last shipment of sodium cyanide from Hebei Chengxin arrived at Rui Hai’s warehouses about a week before the blasts, said the employee, who refused to give his name. “Chengxin is a legitimate company and did not violate any laws, including the environmental-protection law,” he told TIME. The employee said that Hebei Chengxin’s boss, along with around 140 other staff, had descended on Tianjin to help with the cleanup efforts.

Hebei Chengxin is based in Hebei province’s Yuanshi county, an area where cornfields and chemical factories collide. (Hebei province abuts Tianjin.) In recent years, residents of cities both big and small in China have protested against the construction of polluting or potentially dangerous factories near them. So-called NIMBY (not in my backyard) protests have been among China’s most successful civil actions — and most contentious, with local governments often cracking down on residents for daring to oppose potential drivers of local economies.

On Monday, Caijing, a Chinese business publication known for its occasional scoops, reported that one of Rui Hai’s stakeholders was Dong Mengmeng, the son of an ex-police chief of the Tianjin port. Although Rui Hai’s official share structure does not include his name, an unnamed source told Caijing that Dong was involved in the company. While the former public-security boss’s son could well be a legitimate private businessman, the nexus of power and money in China is such that the Caijing allegation, if true, raises the specter of corruption in the development of one of northern China’s fastest-growing zones.

The explosions, which registered a 2.9-magnitude on domestic earthquake scales, took place in the Tianjin Binhai New Area, a vast economic zone that has been heralded as a showcase of China’s hybrid capitalist-communist economy. There are only a handful of such special zones in China, including Shenzhen, near Hong Kong, and Pudong in Shanghai. Binhai’s rapid development is associated with Zhang Gaoli, Tianjin’s political boss for five years beginning in 2007, who now serves on China’s seven-man leadership committee. Chinese state media noted that while China’s economy slowed during that period, Tianjin recorded 16.5% GDP growth for five consecutive years.

On Monday, the Communist Party–linked Global Times published an editorial headlined “Tianjin Officials Fumble to Communicate,” alleging that “officials at grass-roots levels are not willing or not good at facing the public voice.” But when that public speaks or speculates, the results can be risky. China’s Internet regulator has disciplined 50 websites for “creating panic by publishing unverified information or letting users spread groundless rumors” about the explosions, according to state media. Censors warned domestic publications to only use reporting about the Tianjin blasts from official newswire Xinhua, according to China Digital Times, which monitors such propaganda directives from California.

Over the past few years, as industrial accidents and other safety scandals have exploded across China, officials have vowed transparency. Yet each time, censorship and official obfuscation have prevailed. On Sunday, China’s Public Security Minister Guo Shengkun demanded that authorities “release information concerning the Tianjin blasts and rescue operation in a timely and transparent manner, to respond to public concerns,” according to Xinhua.

Yet independent domestic reporting on the Tianjin blasts is now much reduced, even as fires and new explosions were reported at the blast site on Monday morning. Chinese citizens must surely wonder what is going on, even if they have been warned not to speculate on social media. On the afternoon of Aug. 17, the People’s Daily tweeted a breaking story in English: soldiers of an antichemical-warfare regiment patrolling the Tianjin blast site had rescued a fluffy puppy. 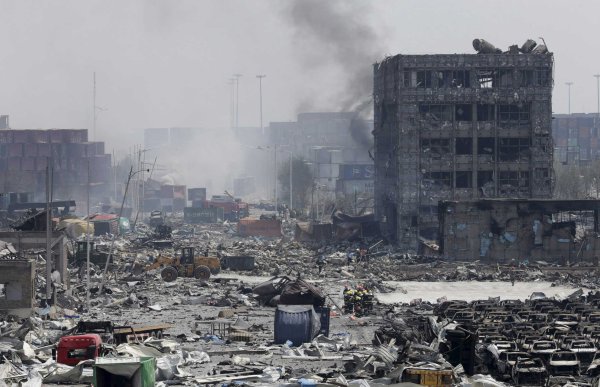 China Shutters 50 Websites for 'Inciting Panic' Over Tianjin
Next Up: Editor's Pick