Koalas may seem cuddly and cute, but this one was sure as hell determined to chase down a fast-moving quad bike.

In a video she posted on Facebook on Saturday, Australian dairy farmer Ebony Churchill is seen riding her four-wheeler to go herd cows. She recognizes a koala she’s seen on her farm before, thinking little of it. But a peaceful sighting quickly becomes a desperate race, as the little koala starts to run after her vehicle.

“He was in love with me and I rejected him so he chased me,” Churchill told the Advertiser, Adelaide’s local paper, jokingly.

But Churchill quickly realized it was no laughing matter. Deakin University wildlife and conservation biologist Desley Whisson told Mashable that koalas can be quite dangerous. “Make sure that there is another object between you and the koala so that it can’t climb you. The claws are nasty,” she said.

As shown in the video, Churchill eventually stopped the vehicle and climbed off for this exact reason. “The more I sped up, the faster he got … I didn’t want to have him grabbing at my leg as I was on the bike,” she told the Advertiser.

Once she got off, the video shows the koala gripping onto one of the tires. Eventually, she told the Advertiser, he climbed off and walked away, but only after she’d made sure to get far away and herd her cows by foot instead. 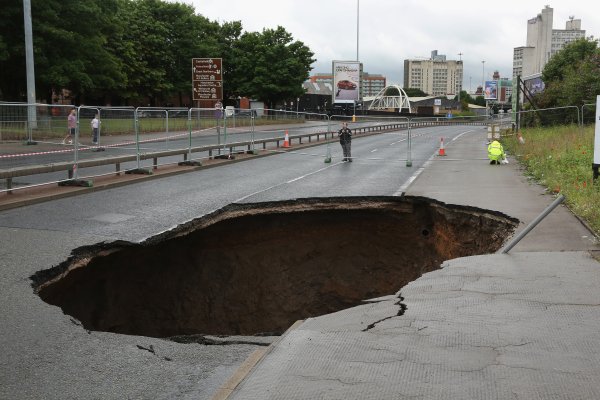 40-Foot Sinkhole Appears in Manchester Street
Next Up: Editor's Pick