Two Frontrunners Circle Each Other at the Iowa State Fair

The rattle of helicopter rotors overhead sent the gaze of dozens of Hillary Clinton’s supporters to the sky outside the Iowa Pork Producers tent. The black and red chopper circled progressively lower as the Democratic front-runner prepared to sample her pork chop on a stick, the iconic food of first caucus state’s annual fair.

One its final circle around the grounds, the block white lettering became visible from the ground: “TRUMP.”

Asked if she had seen the aircraft obviously buzzing above, Clinton demurred. “I did not,” she told reporters with a smile, between greeting fellow patrons as she waited in line in the sweltering heat. “I was just looking at the people.”

In a campaign that has often crossed into the surreal, the scene at the Iowa State Fair may have taken the cake, with the two front-runners passing in close proximity as they chaotically toured the fried food mecca.

Clinton began the morning with a press conference near a livestock corral, pausing with former Sen. Tom Harkin to pet a passing cow. (The photo-op with her latest endorser was almost ruined by an interloping Rolls Royce in the background, until campaign aides had it moved out of the camera shot.) After questions about her campaign and her private email server she spent more than an hour passing through the fairgrounds, pushing past throngs of people with her Secret Service detail to tour the signature butter cow and this year’s special fat sculpture: a carving of Rich Uncle Pennybags, the top-hatted mascot of the game Monopoly.

Posing for selfies with fair-goers, Clinton and her entourage and crush of attendant press waded through the crowd seeking photos and hugs, arriving at the pork tent just as the Trump show was coming to town.

“I highly recommend it,” Clinton proclaimed after taking a single bite out of the chop, and posing for selfies with the vendors. (As Clinton passed, 2012 GOP runner-up Rick Santorum was flipping pork on a grill feet away, seemingly invisible to all with an entourage about one percent the size of Clinton’s.)

Trump reacted to the meat just as Clinton had, taking just a single bite of his own chop from the same stall two hours later, but first, he played the role of amusement ride operator.

Arriving in Iowa aboard his private Boeing 757 and riding by helicopter to a baseball field six miles away, the reality television star turned president candidate whisked area children on a ride around the fair, taunting his rivals from above and riling up a crowd of thousands below.

“Does anyone want to take a ride? It’s nice, right,” Trump asked the crowd of supporters and children waiting for him. “Who wants to go first?” A few short loops later and they were back, with another group of kids taking their place.

Making his way to the fairgrounds from his landing zone in a golf cart motorcade composed, Trump seemed like a man out of place with his white French-cuffed shirt, blue blazer, tan trousers, white bucks, topped by a red ball cap emblazoned with his trademarked campaign motto, “Make America Great Again.”

But Trump was quickly swamped from both sides, with Iowa State Patrol officers parting a sea of thousands of fair-goers seemingly evenly divided by well-wishers and gawkers to make space for the GOP front-runner and his own entourage of personal security wearing “Trump National Golf Club” polo shirts beneath their dark coats. For what seemed like 20 minutes the fair came to a stand-still, with a long line of tractors, golf carts, and passersby unable to proceed down the main thoroughfare, as the crowd looking for a glimpse of the candidate froze the street. In brief conversations with reporters along the half-mile-long route, Trump flashed his braggadocio, claiming to be attracting a crowd 10 times the size of Clinton’s along the parade route.

Addressing reporters in a press conference by his helicopter, Trump engaged in his ceremonial flame throwing, attacking GOP rival Jeb Bush’s fundraising and proclaiming that, “Nobody has more experience dealing with politicians than me.”

Bragging about his wealth, Trump claimed he would spend $1 billion to take the White House. “I would do that, yes. If I had to.” (Campaign insiders say he’s authorized an expense of just one percent of that for his presidential bid, and has spent less than a third of that sum thus far.)

Despite advising supporters and the press that he would visit the butter cow, Trump never showed, departing the fairgrounds in his golf cart-motorcade back to is helicopter and private jet, leaving a crowd of hundreds of sweaty would-be well-wishers near the attraction wondering where he was, until they learned on social media that he had already left the fair.

Both Clinton and Trump avoided the mainstay Des Moines Register “soapbox” where candidates address and field questions from all-comers: Clinton because of concerns about hecklers and Trump because he is feuding with the local paper’s editorial board.

Minutes after both candidates left the fair, Vermont Sen. Bernie Sanders, who is riding a wave of populist frustration in the Democratic Party, rose to speak at the soapbox only to be briefly interrupted once too by Trump’s rotors. “I apologize,” he quipped. “We left the helicopter at home.” 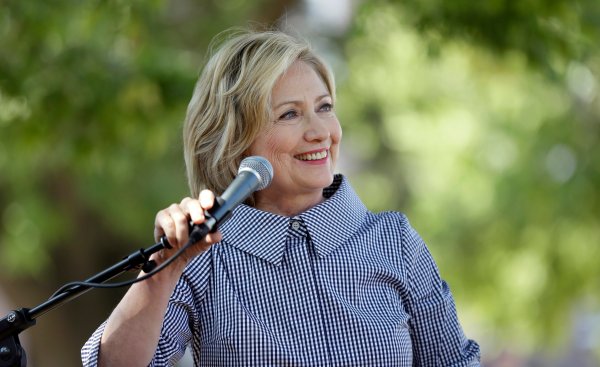