Hillary Clinton Fires Back at Jeb Bush on Iraq Withdrawal

Former Secretary of State Hillary Clinton fired back at former Florida Gov. Jeb Bush’s claim this week that she and President Barack Obama bear responsibility for the continued destabilization of Iraq after U.S. troops left in 2011.

Speaking at a town hall in Dubuque, Iowa, the Democratic presidential hopeful noted that Bush’s brother, former President George W. Bush, had signed the U.S.–Iraq Status of Forces Agreement that scheduled the drawdown of American troops from Iraq — adding that former Iraqi Prime Minister Nuri al-Maliki had been unwilling to allow the U.S. to maintain an advisory, training, and intelligence force in his country after 2010.

“[Jeb Bush] expects the American people to have a collective case of amnesia,” Clinton said, in response to a question about the Middle East. She said she found Bush’s comments on Tuesday — that the “premature withdrawal” from Iraq had been a “fatal error” that paved the way for ISIS — “a little bit surprising.”

Maliki had been uncooperative in negotiations to keep American troops on the ground longer, she said, and was responsible for the destruction of the U.S.-trained Iraqi military. “He had the agreement signed by George W. Bush!” she added. Later in her remarks, Clinton appeared to accidentally refer to her would-be Republicans rival as “George Bush,” before correcting herself, joking, “I get confused…oh well.”

Bush wasn’t the only GOP candidate to come in for criticism by the Democratic frontrunner. Earlier in the town hall, Clinton criticized Wisconsin Gov. Scott Walker for cutting his state’s support of higher education. “It’s really so disappointing,” she said. “He basically slashed funding for colleges and universities. He eliminated some of the loans and scholarship programs…He has made it more expensive and harder for people in Wisconsin to send their kids to college.”

“In effect he said no to both lowering student loans and tax burdens on people who have student debt,” she added. “I just think absolutely that is the wrong direction.”

Clinton also criticized Sen. Marco Rubio’s position on abortion, saying when he said in the GOP debate that he was opposed to exceptions to abortion bans for cases of rape, incest, and the life of the mother, “that was hard to even believe.” 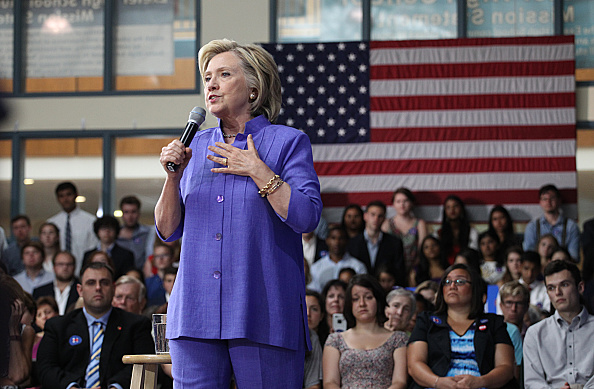 Hillary Clinton Outlines College Plan for Students With Children
Next Up: Editor's Pick