How It Feels to Be on President Obama's Summer Playlist

On Friday morning, the White House released President Obama’s handpicked summer playlists on Spotify—one for daytime chilling, one for nighttime hangs. The 40 songs will presumably comprise the soundtrack to the president’s 16-day vacation in Martha’s Vineyard, assuming Malia doesn’t tell him to turn off the Stones and have a go at what the young people are listening to these days.

Both playlists swing toward the old-school: At lunchtime, he’s listening to The Temptations, Howlin’ Wolf and Sly & The Family Stone while saving John Coltrane, Van Morrison and Al Green for dessert. But the Commander in Chief is also getting down to a crop of relative newcomers, who are delighting in both the exposure and the esteemed company he’s placed them in.

British singer-songwriter and guitarist Lianne La Havas was in her dressing room at the Flow Festival in Helsinki, Finland, when the news came. “I screamed,” she told TIME after coming offstage. “It was hard not to.” For his playlist, Obama selected the title track from La Havas’ 2012 debut album Is Your Love Big Enough. It’s a song she wrote about finding yourself, “kind a celebration of having a newfound love for yourself—in a non-conceited way,” she explains.

Now promoting her new album Blood, which dropped in late July, La Havas took a moment to praise Obama’s taste in music, as well as his decision to include her among many of the greats of the 20th century. “I think he’s a wonderful man and a great inspiration to people, not only musicians, so I’m very, very honored.” He’s at the top of a list of people she’d like to meet, and knowing that he’s a fan, she says, “feels like maybe not quite there, but a step closer.”

Aoife O’Donovan was also overseas, in Kilkenny, Ireland, when her phone began buzzing with text messages exclaiming, “Obama!” The half-Irish, Massachusetts-born folk singer is not quite a newcomer to the music scene—she has played professionally since her days as a student at the New England Conservatory of Music in the early 2000s, and performed in groups with the likes of Yo-Yo Ma and Edgar Meyer. Still, the notifications lighting up her phone were wholly unexpected.

“It just seemed so strange and far-fetched,” says O’Donovan, who took a break from her beer at an Irish pub to talk to TIME. She thought it was a joke until opening up the playlist and seeing her song, “Red & White & Blue & Gold,” sandwiched between Al Green and Lauryn Hill. The experience was made even more surreal by the fact that she and her aunt had just stopped at the Barack Obama Plaza in Moneygall, a rest stop named in the president’s honor after his 2011 visit to the village.

O’Donovan met Obama briefly, back in 2011, when The Goat Rodeo Sessions, her group with Ma, Meyers, Stuart Duncan and Chris Thile, was performing on The Tonight Show with Jay Leno on the same night the president was a guest. Her only hunch as to why Obama might have stumbled across her song—save for remembering her from that appearance—is its setting on the 4th of July. Though it’s more of a love song, she says, “There’s a patriotic element, so maybe that’s why he clicked play.”

More than relishing exposure for her own music, O’Donovan is impressed by Obama’s wide-ranging selection, from jazz to soul to folk. “It’s so cool that he has such eclectic taste,” she says. “I just love thinking about him in Martha’s Vineyard eating some grilled corn and having such a varied summer playlist.” She hopes the president’s decision to share his favorite music will inspire more people to become music-lovers, adding that “it’s great to have a president who’s such a music lover and really been such a supporter of artists throughout his presidency.”

As for the musical selections of the current slew of presidential candidates, O’Donovan notes that Hillary Clinton’s campaign may be printing up some new stickers that say “I’m With Her,” which happens to be the name of O’Donovan’s band with Sara Watkins and Sarah Jarosz. She hopes the coincidence might pay off: “We’re hoping maybe we’ll get to write her campaign song.” 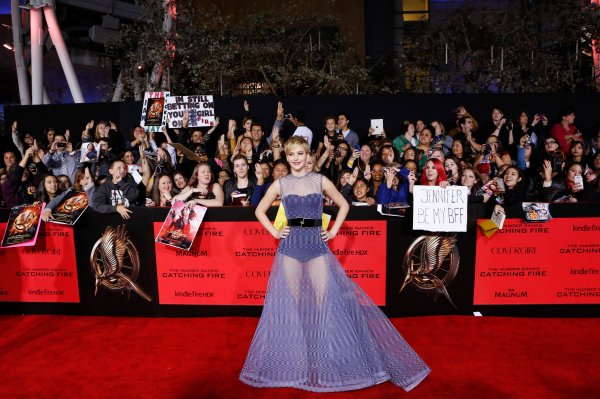 Watch Jennifer Lawrence's Top 10 Quotes for Her 25th Birthday
Next Up: Editor's Pick