At Least Donald Trump Started a Conversation About Menstruation

Donald Trump did the girls and women living in developing world a great favor this week. He got menstruation – the taboo of all taboo words in polite society – onto the front page of the Sunday New York Times. That doesn’t happen every day. In fact, it’s quite possible that hasn’t happened more than a few times since the newspaper was founded in 1851.

Trump’s comment about Fox News anchor Megyn Kelly that she “had blood coming out of her eyes, blood coming out her wherever” was offensive. But it brought the topic of menstruation to the forefront of our daily conversation – at least for a media nanosecond.

So let’s use this moment to have a serious discussion about it.

Every single day, girls around the world get their menstrual periods for the first time, and many of them living in Africa, Asia and Latin America lack adequate information, guidance and support about what is happening to their bodies. Many of these girls see menstrual blood on their underwear for the first time and think they are dying or seriously ill, but are too afraid, embarrassed or ashamed to ask for help.

Menstruation is a real bona fide health issue. It’s not an afterthought of child development or insignificant to a growing girl’s sexual and reproductive health.

If girls don’t have resources for proper menstrual hygiene management (MHM) like practical information, a safe and private place to change a menstrual cloth or pad and water for washing at school, they may miss class, or stop going entirely. Decades of evidence indicate that educating girls improves the overall health of their communities.

But the ongoing taboo around talking about periods makes it hard to find solutions to the challenges girls in low-income countries face. It also hinders the global efforts to address these challenges and bring menstruation into the realm of global health and development.

Since 2004, my colleagues and I have been exploring the topic of menstruation in low-income countries of the world (Tanzania, Ghana, Ethiopia, Cambodia and Pakistan) and conducting research on the problems girls face the first time they get their menstrual period and then have to manage in girl-unfriendly (or rather, menstrual-unfriendly) school environments.

We have found girls who think they are dying or have a serious illness the first time they get their period. We have talked with girls who have to leave school in the middle of the day in order to find a private, clean space to change their sanitary materials.

Other girls have reported the difficulty of getting practical guidance on how to manage their periods with predominantly male teachers in the school or female teachers who are too shy to talk about such a taboo topic.

For a girl who might feel embarrassed or ashamed about her period, sitting in a classroom where boys and girls sit very close together at one desk may raise fears about menstrual blood odor.

Some schools may have rules that require children to stand up when answering questions (what if there is a bloodstain on your clothing when you stand up?). As one rural Ethiopian girl reported:

Many of the schools in the countries where we have done research, especially in rural areas, predominately have male teachers. How many girls would feel comfortable asking a male teacher to be excused? And what if the school lacks adequate toilets and water?

It’s not easy to participate in class when there is no place to change a cloth, a pad or other material to get through the school day. This is the case in about 50% of the least developed countries in the world. Or as one girl in the Philippines reported in an Emory University and UNICEF led study on MHM there:

There is a growing body of research that highlights the seriousness of this problem. Colleagues at other universities, at UNICEF and at many nongovernmental organizationshave also been exploring this issue in other countries.

UNICEF, UNGEI (the UN Girls Education Initiative) and the Canadian government, for example, are supporting a 12-country research project to document the menstrual hygiene management barriers that girls face. Their motivation is that millions of vulnerable girls in low-income contexts need to be healthy and educated: their gender should not impede participation in school.

Getting your period at school shouldn’t be a big deal

This shouldn’t be hard to solve. We just need to learn about the best solutions.

What are the most cost-effective interventions to use in school environments to make sure girls know about menstruation and other body changes? What’s the best way to improve the water and sanitation facilities for both girls and female teachers? What’s the most effective way to assure there are affordable sanitary cloths, pads or other materials available to girls?

The problem is that implementing these solutions is complicated. Overcoming gender discrimination at schools that don’t provide for girls’ (and female teachers’) needs is a hurdle. Ultimately, implementing solutions depends on governments, schools, parents and donors recognizing it is an important issue – and one that can be talked about and addressed.

Although many efforts have been made to include sexual and reproductive health curricula in schools over the last decade, the topic of puberty and menstrual hygiene management in particular has often not been included.

Grow & Know, Inc, a small nonprofit that I founded, develops puberty books with girls and for girls in low-income countries in partnership with local ministries of education, UNICEF and other key stakeholders.

Our first book was designed in Tanzania, with the content then adapted through participatory research conducted with girls in new countries. Book orders have subsequently been made, for example, by the ministries of education in Ghana, Ethiopia and Cambodia.

Other organizations such as Save the Children and UNICEF are engaged in similar efforts in countries such as Nepal, Uganda and Malawi.

In parallel with this information outreach, UNICEF, WaterAid and other organizations are working in many countries – together with local institutions – to focus attention on the inadequate water and sanitation facilities in schools in Bangladesh, Zambia and Nepal.

And, finally, numerous social entrepreneurial organizations are providing more affordable sanitary materials, such as SHE in Rwanda, AfriPads in Uganda, and ZanaAfrica in Kenya.

The key is to start talking openly about this issue.

As musician and Harvard Business School graduate Kiran Ghandi pointed out after running the London Marathon without a tampon:

Menstruation is, after all, totally normal. So let’s break the taboo and not wait for the next time a celebrity starts bloviating to talk about menstruation again. 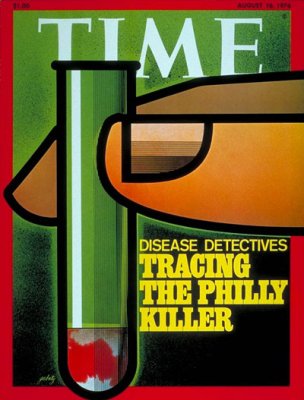 This Is How Legionnaires' Disease Got Its Name
Next Up: Editor's Pick