Russian President Vladimir Putin delivers his annual state of the nation address to the National Assembly in Grand Kremlin Palace on in Moscow on Dec. 4, 2014.
Sasha Mordovets—Getty Images
By Ian Bremmer

For the first time since 2009—low point of the global economic slowdown—Russia is in recession. Its economy will contract 3 percent this year, though Moscow’s $360 billion in cash reserves will cushion the immediate blow. Still, as President Vladimir Putin continues to try to assert Russian power on the international stage, it has become clear that he is now ruling a “submerging market.” Unless something changes, Russia is in for a slow and steady economic decline. These five sets of stats explain why.

It’s not simply the size of your economy, but its diversity and resilience that counts. For years, the Kremlin has supported and protected large state-owned companies at the expense of small and medium-sized enterprises (SMEs). But those smaller firms are the foundation of any strong and well-diversified economy. SMEs spur innovation and respond effectively to changing times, technologies, and consumer tastes. In the EU, SMEs contribute an average of 40 percent to their respective countries’ GDP; in Russia, SMEs contribute just 15 percent. Those are daunting figures for anyone looking to start a business in Russia.

Things aren’t getting better—between 2008 and 2012, Russia’s private sector lost 300,000 jobs while the state added 1.1 million workers to its payroll. Rather than diversifying, Moscow is doubling down on its state-centered approach to economic development.

2. At the Mercy of Oil Markets

The price of oil has now fallen below $45 a barrel—welcome to the new normal. OPEC continues to pump oil at historic rates as it tries to price out competitors, and Iran expects to bring over a million new barrels a day to world markets after the lifting of international sanctions. These are deeply troubling developments for Moscow, which relies on oil and gas sales for nearly 50 percent of its government revenues. In 1999, oil and gas accounted for less than half of Russia’s export proceeds; today they account for 68 percent. Moscow has grown so reliant on energy sales that for each dollar the price of oil drops, Russia loses about $2 billion in potential sales. For Russia to balance its budget, oil will need to surge back to $100 a barrel. That’s going to take a while.

3. At the Mercy of Sanctions

Moscow’s over-reliance on crude oil—which makes up 40 percent of Russia’s state budget—has also left the country particularly vulnerable to international sanctions. Given the age of many existing fields, Russia will increasingly depend on cutting-edge technology from Western firms to pump oil from difficult-to-reach shale and deep-water reserves. These sources could account for more than 15% of the world’s undiscovered oil reserves and 30% of the gas. Some argue that Russia can turn for help to China—but while China wants more Russian oil and gas, it doesn’t have the technology Russia needs to draw those resources from the ground. The IMF believes sanctions could eventually cost Russia 9 percent of its GDP.

Russians aren’t nearly as productive as they could be. For each hour worked, the average Russian worker contributes $25.90 to Russia’s GDP. The average Greek worker adds $36.20 per hour of work. And Greece is not a country you want to trail in productivity. The average for U.S. workers? $67.40.

In addition, endemic corruption costs the Russian economy between $300 and $500 billion each year, or roughly the cost of three Greek bailout packages combined. This year, Freedom House gave the country a 6.75 on its corruption scale; 7 is “most corrupt.”

It’s no surprise then that well-educated Russians are leaving their country in droves. Between 2012 and 2013, more than 300,000 people left Russia in search of greener economic pastures, and experts believe that number has only risen since Moscow’s annexation of Crimea last year.

5. No Incentive to Change

Russia’s biggest problem may be denial. Typically, a stumbling economy brings about change in political leadership. Some countries, like Greece, take this to an extreme—Athens has seen five different governments in five years. But Russians have gone the other way—as their economy has slowed, Putin has grown more popular; he now holds an approval rating of 86 percent. More surprising is that while 73 percent of Russians are unhappy with their economy, 7 in 10 approve of the way Putin is handling it.

How is that possible? About 90 percent of all Russians get their news from Russian television channels directly controlled by the Kremlin. By framing sanctions and the invasion of Ukraine as “Russia vs. the West”, Putin has succeeded in stoking the country’s nationalism. Today, 63 percent of Russians have a very favorable view of their country, up from 29 percent in 2013 and 51 percent in 2014. It’s easier under those circumstances to blame bad economic circumstances on outsiders. Credit where credit’s due—Putin knows what his people want to hear. It’s just not clear if he knows how to fix his flailing economy. 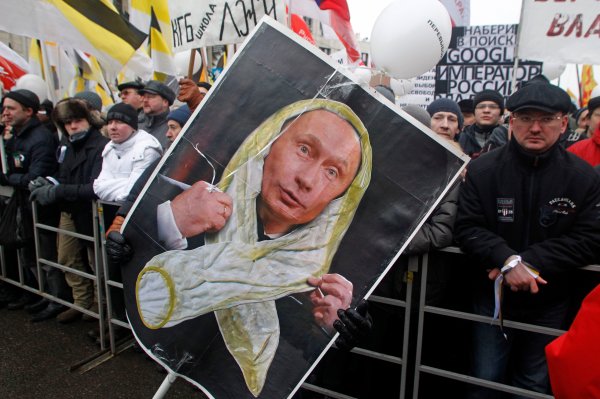