Japan's Prime Minister Shinzo Abe attends a news conference to deliver a statement marking the 70th anniversary of World War Two's end, at his official residence in Tokyo Aug. 14, 2015.
Toru Hanai—Reuters
Ideas
By Rabbi David Wolpe
Wolpe is the Max Webb Senior Rabbi of Sinai Temple in Los Angeles, the author of eight books and has been named one of the 50 most influential Jews in the world by the Jerusalem Post.

How many Americans remember Iran Air Flight 655? It was a civilian plane that was shot down by the U.S. navy ship Vincennes in 1988. In this terrible accident, 290 people, including 66 children, were killed. At the time, Vice President George H.W. Bush said: “I will never apologize for the United States — I don’t care what the facts are. … I’m not an apologize-for America kind of guy.”

Nations have a hard time apologizing for wrongdoing. It seems humiliating when they also have complaints and grievances against others. This week, on the eve of the 70th anniversary of Japan’s surrender in World War II, Japanese Prime Minister Shinzo Abe said that Japan has repeatedly expressed remorse, but he did not say “I’m sorry.” He acknowledged the infliction of “immeasurable damage and suffering,” but he also said that “we must not let our children, grandchildren, and even future generations to come, who have nothing to do with the war, be predestined to apologize.”

The prime minister of a country that did “immeasurable damage” is not himself part of future generations to come. He is the symbol of a nation that, in living memory, committed unspeakable atrocities on a large scale. The fear of apologizing too much is unwise; the solicitude for the apology of future generations rather than the hurt of present ones is unworthy, and the refusal to speak the simple words “I’m sorry” is wounding.

The one who hurts should break out of the confines of swagger and defensiveness. I think Iran is a dangerous regime—Iranians seek to destroy much that I hold dear. Nonetheless, when we accidentally kill civilians, as we did in 1988, we should apologize to them. President Bill Clinton’s administration finally expressed “deep regret” in 1996.

Apologizing is part of being a grown-up nation. Japan did terrible things to people who are still alive, and whose children have suffered from the legacy in powerful ways. That the prime minister cannot bring himself to say the words “I’m sorry” does them no credit.

Psalm 51:17 teaches: “A broken and contrite heart, dear God, You will not despise.” To humble oneself is not an act of humiliation, but one of spiritual grandeur. 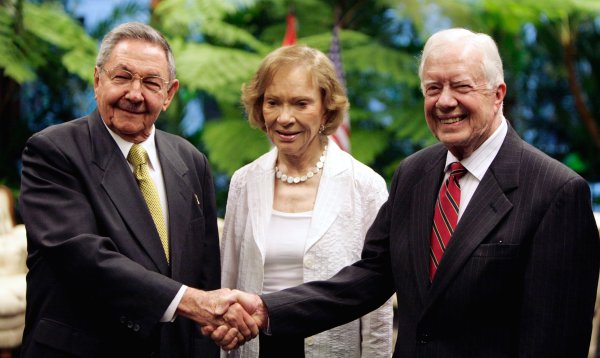 Jimmy Carter Paved the Way for U.S. and Cuba Relations
Next Up: Editor's Pick