Canadian Neil Bantleman and his Indonesian colleague Ferdinant Tjiong were initially convicted under Indonesia’s child-protection law — which calls for a maximum of 15 years in prison for sexual abuse toward a child. They had been accused of raping three kindergarten-aged boys at the Jakarta Intercultural School, formerly known as the Jakarta International School.

They were set to serve a 10-year prison sentence, of which they’ve already served over a year, the CBC reports.

The two teachers maintained their innocence throughout the trial. AP says that staff at the school campaigned for their release, arguing that the case was motivated by money after the mother of one of the children sued the school for $125 million in compensation.

A judge threw the mother’s case out of court on Aug. 10, saying that there was not enough medical evidence to prove the boys had been assaulted. In July, a Singaporean court found the woman guilty of defaming the two teachers and ordered her to pay damages. (The defamation case was heard in Singapore because initial accusations against Bantleman and Tjiong were made in the form or emails and texts sent from the city-state.)

“The truth is finally revealed and justice has been done,” the teachers’ lawyer, Hotman Paris Hutapea, told AP. 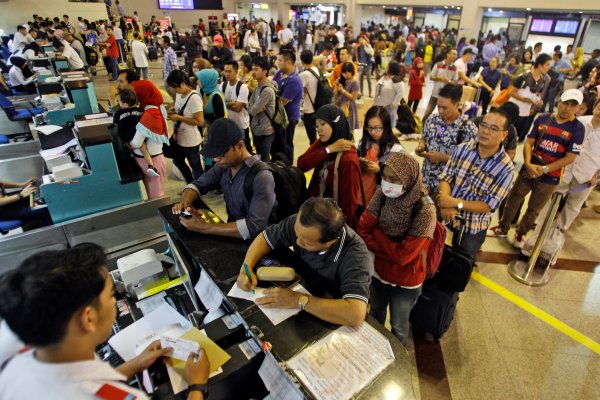 Travel Chaos in Indonesia
Next Up: Editor's Pick