When N.W.A. Was America's Most Dangerous Group

The new biopic of iconic West Coast rap group N.W.A., Straight Outta Compton (in theaters Friday), may come as a shock to younger viewers. Is that really the Ice Cube who starred in mainstream comedies like Ride Along and Last Friday? Is this the same Dr. Dre who designed my headphones? It’s hard to think of a more stark illustration of how rap went from being the protest music of an angry, marginalized subculture to the multi-unit-selling mainstream genre it is today than the rise and rise of N.W.A.’s two biggest surviving stars.

Twenty-four years ago the idea that Ice Cube would one day wrestle a talking deer in Are We There Yet? would have been unfathomable. This, after all, was the man whose fierce opening verse in 1989’s ‘F—k the Police’ helped prompt the FBI to send a letter to the group’s record distributor advising them that “advocating violence and assault is wrong.” By 1991, N.W.A. was reveling in its self-described role as the World’s Most Dangerous Group, condemned by politicians and law enforcement authorities alike. Straight Outta Compton had sold some 2 million copies, and its hotly anticipated second full album Efil4zaggin (read it backwards) brought the group fresh infamy when it was released in June of that year.

The album’s cover showed N.W.A. — now without Cube, who had left to start a solo career in 1989 after falling out with manager Jerry Heller — as ghosts rising from gunned-down corpses, and its content was no less violent or nihilistic. Songs about violence and sex were punctuated with skits that were just as extreme; the band used the N-word some 249 times. Having been roundly condemned as a menace to society, the group was doing its best to live up to the label. And it worked; the album was banned from some record chains in the U.S., and British authorities, under the authority of the Obscene Publications Act, seized 25,000 copies of the album upon its release. Critics weren’t impressed. TIME’s Jay Cocks branded the album “grotesque” in a July 1991 review, not for its threat to the moral order but for its relentless negativity and misogyny:

N.W.A.’s runaway success was driven not by “street-seasoned bloods,” Cocks wrote. Instead, he continued, the group appealed to white, middle-class teenage boys thousands of miles from South Central L.A. who were looking for a way to rebel (boys like this writer, who remembers listening to a bootlegged tape in late 1991 with a mixture of disgust and riotous glee). Little surprise then that the moral majority believed the hype about N.W.A. being so dangerous. To Cocks, however, they were a danger only to themselves — the threat of being “stifled”, he wrote, by their own “ravening sexism.” It’s a charge that hip-hop has never quite managed to shake even as it moved further into the mainstream, with jiggling booties still common in music videos and female rappers often treated with disrespect or outright hostility.

But a quarter century on, as a new generation prepares to learn about the rise of N.W.A. and the lure of its music, the absence of a truly disruptive band or musician of the moment is striking. Plenty of artists still express their anger at society, especially as the world becomes increasingly aware of inequality, but the top of the pop charts is not usually where those people end up. So who are today’s preteen boys listening to in their private moments of rebellion, who is upsetting the nation’s parents, who is riling up the critics — and who will perhaps sell us headphones in a decade or two?

Read the full 1991 article about N.W.A., here in the TIME Vault: A Nasty Jolt for the Top Pops 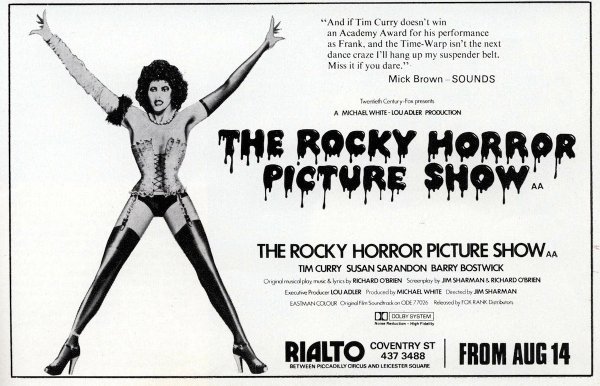 How 'Rocky Horror' Became a Cinematic Institution
Next Up: Editor's Pick