Mine waste from the Gold King Mine north of Silverton fills the Animas River at Bakers Bridge on Aug. 6, 2015 in Durango, Colo.
Jerry McBride—Durango Herald
By Aditya Agrawal

Navajo Nation president Russell Begaye has ordered Navajo citizens not to use an “offending” damage-claims application released by the Environmental Protection Agency (EPA), a week after EPA crew released over 3 million gallons of contaminated wastewater into the Animas and San Juan rivers.

The EPA allows people to claim compensation for “personal injury or property damage” caused by the incident using a Standard Form 95, released Tuesday on its website

At the bottom of the first page, the form contains the disclaimer: “I [. . .] agree to accept said amount in full satisfaction and final settlement of this claim.”

Begaye has criticized the fact that the form contains “offending language.” “Once the claim is made it will only be for the claims suffered to date and precludes future claims,” he said.

The Navajo President said he sees damages from the spill to continue piling up for at least the rest of the year. The Navajo Nation is attempting to negotiate modified terms of compensation with the EPA.

Begaye told TIME on Wednesday that EPA officials had said that it would take “decades” for a full clean up of the San Juan river, and Navajo populations living along the river may have to live in uncertainty until then.

The EPA refused to confirm this exchange.

The form is “not required to present a claim, but is a convenient format for supplying the information necessary,” the EPA said in a statement.

However, EPA spokeswoman Liz Purchia could not provide information about alternate ways of applying for compensation. That information is also unavailable on its damages webpage.

Correction: The original version of this story misspelled the last name of the EPA spokeswoman. Her name is Liz Purchia. 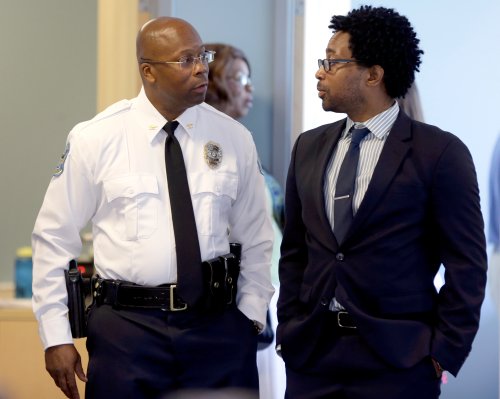 Ferguson's Interim Police Chief Was Suspended 3 Times in the Past
Next Up: Editor's Pick