“How did you do it? What’s your secret?” says Donald Trump, quizzically, and with a tinge of jealousy.

No, he isn’t talking about Carly Fiorina’s recent surge in the polls for the Republican presidential nomination. Instead, he was speaking to (or rather at) Grimace, a giant purple blob used by McDonald’s to push its products, in a commercial from 2002.

Trump, who noticeably had more hair at the time and who seemed a lot calmer and less combative than on the campaign trail today, speaks to the massive mascot: “I put together some really impressive deals, but this thing you’ve pulled off, it’s really amazing.” The product he’s advertising is McDonald’s now defunct “Big N’ Tasty,” which was selling for just a dollar.

The item was removed from McDonald’s locations in the United States in 2011.

Grimace doesn’t say anything, but still Trump sings his praises and looks to the future. He gazes out a window from his office with the blob at his side, saying, “Together, Grimace, we could own this town.”

Check out the 30-second spot here:

And in case you can’t get enough of Trump, here’s what winners of his reality show The Apprentice think of his leadership prowess. He was also lampooned by “The Simpsons” for his hair. 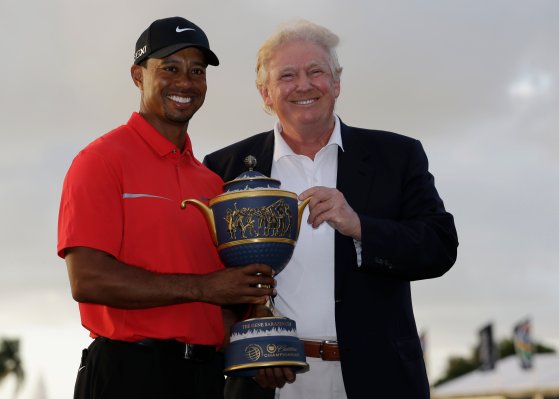 The PGA Will Keep Using Donald Trump's Golf Courses
Next Up: Editor's Pick