Review: Straight Outta Compton Is a Bio-pic With a Sanitized Attitude

Straight Outta Compton, the story of the pioneering hip-hop group N.W.A, is stylish. It’s got a dope beat. And fans of a certain age will be able to rap right along to it. It also lands at a pivotal moment in American race relations, as the Black Lives Matter movement addresses police violence against unarmed African-American citizens. Nearly three decades after the release of “F-ck tha Police” in 1988, N.W.A’s best known anthem remains one of the most inflammatory pieces of pop-culture commentary on the subject–a three-word verbal hand grenade. With that underpinning, Straight Outta Compton can’t help but engage, despite a relentless impulse to sabotage its own credibility.

The movie begins late in the Reagan Administration with high school rhyme maniac O’Shea Jackson, a.k.a. Ice Cube (played by the rapper’s real-life son, O’Shea Jackson Jr.), taking his notebook of poetry to broke-but-brilliant club-music maker Andre “Dr. Dre” Young (Corey Hawkins), who is stuck performing in a played-out regional act. This is crack-era Los Angeles, LAPD and its infamous “battering ram”–local police were as much the enemy as rival gangs.

The aspirations of Dre and Cube take flight upon persuading business-minded street hustler Eric “Eazy-E” Wright (Jason Mitchell) to help fund a raw brand of vinyl-set storytelling. The seminal gangsta-rap track “Boyz-n-the-Hood” is written by Cube, produced by Dre, performed by an amateurish and frightened Eazy-E and destined to sell as well as the sex and drugs depicted in its rhymes.

While N.W.A finds cash, infamy and girls thrown at it, Straight Outta Compton moves with the urgency of the group’s greatest hits. Director F. Gary Gray (Friday, The Italian Job) is as masterful in orchestrating the group’s performance scenes as he is conducting tense LAPD abuse sequences. The group’s popularity explodes, drawing attention from the FBI for its no-holds-barred law-enforcement critique, and as fast as the quintet hits it begins to splinter.

At 2 hr. 30 min., Straight Outta Compton gives ample time to an incredible Ice Cube rock-star tantrum, as well as Tupac and Snoop Dogg soundalikes for cheap third-act thrills. Yet Dre’s 1991 assault on female journalist Dee Barnes–dismissed by Eazy-E because the “bitch had it comin'”–doesn’t make the final cut. Screenwriters Jonathan Herman and Andrea Berloff’s characterization of the relationship between dodgy Caucasian manager Jerry Heller (Paul Giamatti) and Eazy-E is the most nuanced facet of a script that’s undone by melodrama.

Despite Straight Outta Compton‘s energetic acting and Gray’s capture of in-studio Eureka! moments, it never manages to transcend biopic hagiography, with characters whose names appear in the production credits–Dre, Cube and Eazy-E’s widow Tomica Woods-Wright–faring best onscreen. Gray appears to know it; he includes an exchange between Cube and Eazy on the value of a classic Afterschool Special, of which the film seems a high-end take. N.W.A’s gritty, complicated history deserves an equally complex film adaptation, something closer to the “reality rap” its members claimed to create. 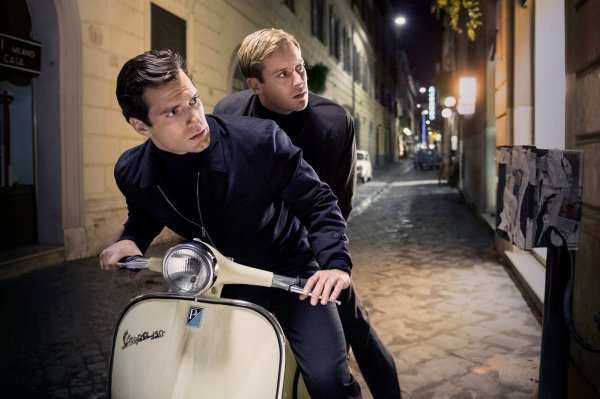