An environmental expert says evacuation of the area around Wednesday’s mammoth warehouse blast in the Chinese port city of Tianjin is the “main priority,” and warned of the explosion’s long term consequences.

His words came as the death toll continued to rise, with at least 50 people dead and over 500 hospitalized, of which 71 are in critical condition, officials said Thursday. Several of the dead are reportedly firefighters.

“With a blast like this, normally you would expect the transport [of particulate matter] to be along the wind gradient or contours, but a blast this big must push it beyond that in the opposite direction,” Ravi Naidu, Director of the Global Centre for Environmental Remediation at the University of Newcastle Australia, told TIME. “Not just people but animals and other organisms would be exposed to certain chemicals.”

Rescue operations have been temporarily suspended while chemical teams scan the area for harmful materials as fears of airborne toxins mount.

“We are concerned that certain chemicals will continue to pose a risk to the residents of Tianjin,” Greenpeace Asia’s Beijing office said to TIME in an emailed statement. “According to the Tianjin Tanggu Environmental Monitoring Station, hazardous chemicals [that may have been at the blast site] include sodium cyanide (NaCN), toluene diisocyanate (TDI) and calcium carbide (CaC2), all of which pose direct threats to human health on contact. NaCN in particular is highly toxic. Ca(C2) and TDI react violently with water and reactive chemicals, with risk of explosion. This will present a challenge for firefighting and, with rain forecast for tomorrow, is a major hazard.”

The city in China’s northeast—located 150 km from the capital Beijing—was rocked by two massive explosions late Wednesday night, with videos released soon after the incident showing a massive fireball rising high into the air above a warehouse as well as a person killed by debris when the explosion shattered the glass wall he was approaching.

The blasts took place at around 11.30 p.m. local time at a warehouse belonging to Ruihai International Logistics, a transportation company that, according to its website, is involved in “cargo declaration, cargo transportation and warehouse storage of dangerous cargo.”

What appears to be video shot from a drone camera released Thursday morning showed the charred remains of hundreds of parked cars and several surrounding buildings, completely destroyed by the blasts. TIME was unable to independently verify the video’s original source.

A local resident with last name Xu, who lives in the Haigangcheng locality about a kilometer away from the blast site, told TIME he was watching TV at home when the explosion threw him to the ground in what he assumed was an earthquake. Shortly after, he and his family rushed out into the open and smelled the scorched air, he said, as pieces of glass and other debris began raining from the sky.

Many people cut by the showers of glass went to the Taida Medical Center, the hospital closest to the site and the one to which most of the injured have been taken.

Police, meanwhile, have set up check points three kilometers away from the blast site and are not allowing anyone to enter. Local media reports say hundreds of soldiers are being flown in to assist with evacuation and containment efforts.

Environmental expert Naidu says that the explosions’ long term effects will have to be monitored closely, particularly with regards to the soil in the area and the nearby buildings getting infused with toxic chemicals.

“Such explosions not only affect the environment but also the minds of people, psychologically quite a lot of people will be impacted and this is something that has to be taken into consideration,” he said.

With reporting from Gu Yongqiang/Tianjin

Read next: Here Are 5 of China’s Worst Industrial Disasters 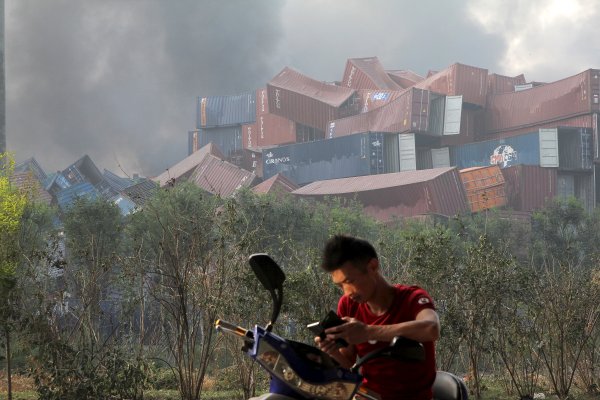 Here Are 5 of China's Worst Industrial Disasters
Next Up: Editor's Pick