Egypt's Security In Question After ISIS Beheading of Croatian

A photo claiming to show the decapitated body of a Croatian hostage killed by ISIS-backed fighters is raising renewed concern about security in Egypt for tourists and foreign workers in the wake of weeks of attacks by insurgents.

The image that surfaced on social media on Wednesday appeared to show the decapitated body of Tomislav Salopek, 30, who worked in Egypt for a subcontractor for CGG, a French oil services company.

Salopek was kidnapped in July on a desert road on the outskirts of Cairo, some 50 kilometers from the city’s edge, according to an early official account. The gunmen who seized him released his Egyptian driver, according to the same account.

If confirmed, it would be the second killing by insurgents of a foreign worker on Egyptian soil, and the first that resembles previous executions of hostages by the Islamic State in Iraq and Greater Syria (ISIS) in Iraq, Syria and Libya. Moreover the death of a foreign worker abducted in Egypt’s “mainland” undermines recent attempts by Egypt’s military-backed government to project an aura of security and renewal after years of unrest.

“Egypt is trying to increase foreign direct investment but it’s going to make it difficult to bring foreigners who want to work as part of that investment because of concerns over risk,” says Angus Blair, president of the Signet Institute, an economic and political think tank in Cairo.

“It’s more bad news. Egypt’s authorities have banned all movement of foreign workers outside of armed convoys,” he says, referring primarily to workers in the oil and gas sectors working far outside Egypt’s cities. Blair says he did not expect recent event to affect tourism, as tourist sites are “protected by the military.”

The execution of a foreign hostage could also suggest a new approach for the so-called Sinai Province of the Islamic State, which has waged a deadly insurgency against the Egyptian state. The “Sinai Province” grew out of another group called Ansar Beit al-Maqdis, which allied with ISIS in 2014.

To date, the majority of those attacks have been concentrated on Egypt’s military and police, in Sinai, Cairo, the Nile Delta and elsewhere. In 2014 the militants killed an American oil worker, William Henderson.

Following an increase in attacks in June and July, security has been ramped up at Egyptian government and foreign buildings in Cairo. Trucks unloading concrete blast walls are a familiar sight in the capital. In one attack in July, a bomb destroyed part of the Italian consulate in central Cairo.

The still image of a headless body that emerged on Wednesday identifies the victim in Arabic as a “Croatian prisoner ‘whose country participates in the war on the Islamic State.’” Superimposed alongside the image are two clippings from Arabic media seemingly meant to confirm Croatia’s participation in the coalition against ISIS. One clipping appears to be a screenshot from the website of the Jordanian newspaper al-Dostor.

The image shows a head stacked on top of a headless body, the hands bound behind the back, a stream of blood oozing from the neck onto desert sand. Adjacent to the body is a knife plunged into the sand, while behind the body is the black flag used by ISIS fighters. Projected onto the sand are shadows of what appear to be two people, possibly the executioners, standing behind the camera.

In a video released a week ago, Salopek’s captors threatened to kill him within 48 hours unless the Egyptian government released “Muslim women” from prison in what could be a reference to the thousands detained in a two-year political crackdown since the military ousted Islamist president Mohamed Morsi from power.

That ultimatum was issued on the eve of Egypt’s inauguration of the Suez Canal, a project hailed by the government as a turning point for the Egyptian economy. For days, a lavish state-sponsored celebration of the canal dominated headlines in Egypt, largely burying news of the threat on Salopek’s life. 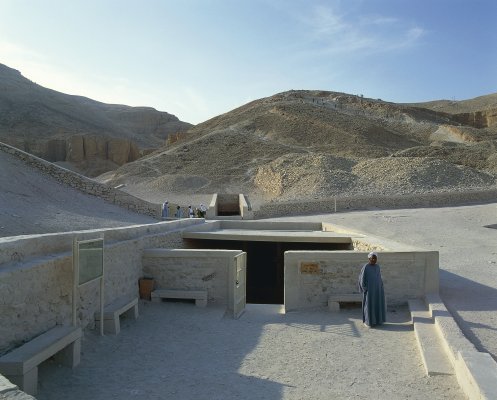 Archaeologist Says He May Have Found Nefertiti's Tomb
Next Up: Editor's Pick