Coco Chanel’s story is the classic tale of rags-to-designer-tweed, a stylish Dickensian drama. Born in dire poverty to unwed parents on this day, Aug. 19, in 1883, she was shuffled off to an orphanage and raised by Catholic nuns after her mother died.

Smart and unsentimental, she made the most of her hardship, gathering her experiences like fabric for future designs. The 2009 biopic Coco Before Chanel shows the wheels turning even in the orphanage, where, as TIME’s reviewer put it, “she stares at the nuns around her, downloading the crisp whites of their wimples for future use.”

Everything Chanel encountered among the very poor became material for the fashions she’d later design for the very rich. “She invented the genre pauvre, or poor look,” TIME wrote in 1957. “[She] put women into men’s jersey sweaters, created a simple dress based on a sailor tricot. She used a ditchdigger’s scarf, a mechanic’s blouse, a waitress’ white collar and cuffs, popularized slacks, backless shoes, cotton dresses.”

Of course, the very simplicity of her fashions was part of their charm, as TIME concluded in 1960, praising “their straightforward design and use of ordinary fabrics,” and noting, “They can be easily copied, cheaply mass-produced.”

Her childhood had instilled in Chanel resourcefulness and razor-sharp survival instincts, which were the keys to her success — but didn’t necessarily make her likeable.

Although she couldn’t sketch and didn’t like to sew, according to a 1931 New Yorker profile, she established herself in the fashion world through a series of liaisons with wealthy men, starting with a French officer who, per the New York Times, “installed her in his chateau, taught her to conduct herself with high style on horseback and, generally, gave her the skills she needed to make her way up through society.”

But her opportunism caught up with Chanel after World War II, when the maker of one of the world’s best-selling fragrances came away smelling not-so-sweet. She had a wartime love affair with a German officer, collaborated with the Nazis in France and may even have spied for them. And, under the anti-Semitic laws of Vichy France, she sought to dispossess the Jewish business partners who had helped finance production of her famous perfume, arguing that the company “should be Aryanized,” according to the author of The Secret of Chanel No. 5.

The stain of her wartime misdeeds lingered. When she reappeared on the fashion scene in 1954, per TIME, “her name still had ‘disgraced’ attached to it.” Americans, however, managed to forgive and forget, at least enough to snap up her clothing line. The Chanel suit, if not Chanel herself, retained its lasting appeal.

By the 1960s, she was more controversial for lashing out against the most beloved fashion of the time: the miniskirt.

“Dégoütant,” she said of the trend in 1966. “Now I know why men don’t like women anymore.” She kept the hemline of her iconic skirt suits where it had always been: just below the knee. 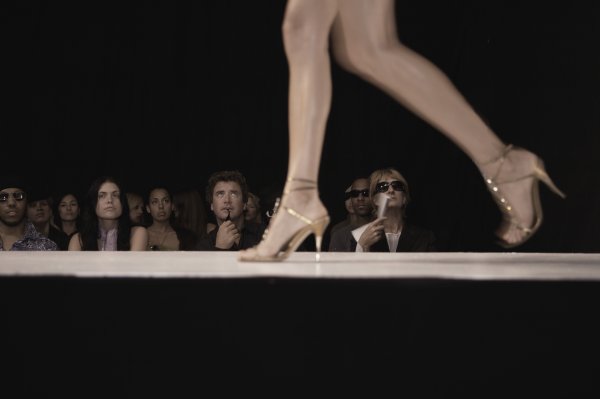 Model With Down Syndrome Will Walk in New York Fashion Week
Next Up: Editor's Pick