By now, most of us have marveled at the skill and ferocity of MMA champion Ronda Rousey. Her recent 34-second dismantling of Brazilian Bethe Correia, and her dedication of the fight to recently deceased pro-wrestling legend Roddy Piper, places her on hallowed ground in the eyes of many fight fans. But because she is a woman — an attractive woman — complicates things for not only some fans of the sport, but the public at large.

There is no questioning the credentials of Ms. Rousey. She’s undefeated, all by knockout or submission. She’s only been taken to the third round once. She has won fights in 14, 16 and 25 seconds. Only a handful on her fights have gone past a minute. In fact, she’s only ever needed to spend a total of 25 minutes and 36 seconds to win all of her 12 fights. But the she thing remains problematic for purists, and for non-enthusiasts, whose pop culture radars have been lit up by Rousey.

Friend and prominent conservative radio host Buck Sexton expressed that side’s bewilderment, and let’s face it disgust, in a tweet:

More than 80 people favorited his tweet, and many of the comments were similar in nature. While I’m not aware of a plank in the conservative platform that states “Women Shall Not Fight,” I do believe many conservatives would cite traditional values (and gender roles) in their rejection of a woman so good at beating people up.

Rousey battles in a sport that did not allow women to fight until just a few years ago. In fact, Rousey herself was the first female competitor signed to the biggest MMA promotion, the Ultimate Fighting Championship (UFC), in 2012.

Yet women punching each other in a ring is not necessary a new thing. The first known female bout in this country dates back to the 1870s. Women’s boxing in the Olympics debuted in 1904, albeit as a demonstration. But in the sanctioned amateur ranks, the Golden Gloves didn’t allow female fighting until 1994. It wasn’t until the 2012 games that women fought for medals. The professional boxing picture for women has grown expansively since the mid-1990s.

So, it is in this climate of wonder and outrage, my daughter fights. She’s training now, but vows, over the absolute forbiddance of her mother, to become a champion. She is 9 years old.

She and her 7-year-old brother and a handful of other little boys train together at Champs Gym in downtown New Rochelle, New York. Although anyone can train here, it is a serious place for serious fighters.

Champs Gym is not stranger to female boxers. It’s home to Golden Gloves winners, and champions like Krystal Dixon, the women’s 2014 USA Heavyweight Boxing champion. She will fight for a gold medal in Rio.

The kids and I must have passed by the gym dozens of times before I suggested we wander upstairs to take a look. When I asked if they trained girls, the owner of the place looked at me and my baby girl and said, “We train women. They are treated the same way as the men. They get no special treatment here, so don’t ask for any.” My little girl looked at him, nodded, and said “Good.”

With that, the children began their training, alongside a half-dozen other similarly aged kids. My girl is the only girl, but works hard enough that most of the boys have forgotten about that part of who she is. Here’s a sample workout for the kids, mind you:

And then there’s the boxing instruction itself: they learn punches and punching technique, and how to avoid getting punched. Early on, the coach would stop the gym and point out my daughter’s jab. Other times the gym would stop and watch her climb the rope and tap the ceiling, over and over again until someone yelled it was their turn.

When your child is good at something, you feel two things: 1. pride in their effort and skill, and 2. good about yourself because you have to have had something to do with it. Never mind that my varsity sport was marching band.

Yet this is boxing, a sport where the winner physically dominates the other by punching them repeatedly. There are the injuries, and the consequences. Rare is the fighter that walks away from the sport clean and without damage. Boxers die from severe brain injuries. Studies show 15–20% of all boxers end up with the disease dementia pugilistica, or DP. It is caused by repeated concussive blows to the head over a period of time. Symptoms include mental deficiencies, memory loss and tremors. DP is just one of a spectrum of illnesses waiting for boxers as they age.

Of course, all these studies relate to men. Women simply haven’t been in the sport long enough to be studied extensively. But we are finding out some things about girls in sports — they concuss at a rate much higher than men. The Journal of Athletic Training released a study of collegiate injuries over 16 years. It found that in many sports, like basketball and soccer, women suffer higher rates of concussions than their male counterparts. In softball, the rate was double that of male baseball players. No one really knows why girls suffer more concussions, and it doesn’t get much attention. And there is essentially no data on women who fight.

I asked my daughter if she knew who Ronda Rousey is. She gave me the “please, Daddy” face, and said yes, “Ronda is the Queen of Boxing.” I asked her if she’s bothered that her admirers called Ronda a “beast.” “No, Daddy,” she said. “That’s a compliment. It means she’s better than anyone else. Better like me. She fights to show she’s better than the rest, and other people’s opinions shouldn’t stop her dream.”

UFC President Dana White says he believes if Ronda Rousey fought Cris “Cyborg” Justino it would shatter the company’s pay-per-view records. Until now, that record of 1.6 million buys goes to the Frank Mir-Brock Lesnar fight in 2009. White says Rousey-Justino would do 2.5 million, nearly one million more from combatants who weren’t allowed in the league until three years ago.

With Rousey heading into uncharted success in and out of the ring, I wonder how many other young girls will don gloves and head into the ring, and even the octagon. And I wonder how many dads will wonder if they are doing the right thing by letting them do it.

This article was originally published by Autonomous on Medium

Read next: Ronda Rousey Has the Best Response to People Who Think Her Body Is Too Masculine 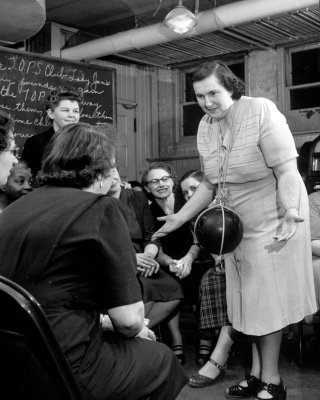 How the 'Fat Ladies Non-Anonymous Club' Revolutionized Weight Loss
Next Up: Editor's Pick