Thank You, Donald Trump, for Starting a Needed Conversation About Sexism

A few years ago, I wrote an open letter to my then-3-year-old daughter, apologizing for all the years I had spent oblivious to society’s subtle (but now obvious) sexism.

Having a daughter was life-altering on many levels — not the least of which was opening my eyes to all the little ways women are treated differently every day.

But even before my daughter was born, I got a close-up look at some of these challenges while working on Hillary Clinton’s first presidential campaign.

The 2008 campaign between Barack Obama and Hillary Clinton for the Democratic presidential nomination was truly historic, with two of the most visionary and transformative candidates our nation has ever seen.

Either one was going to dramatically change the direction of our economic and foreign policy. But that election also elevated the topics of race and gender to the presidential level.

The election of Barack Obama certainly did not signify that we had become “post-racial.” (Whatever that means.) But, it did begin to raise our collective consciousness, and show that we were finally willing to look past a candidate’s skin color when examining his qualifications for the Oval Office. And, as the campaign progressed, it showed the willingness of so many Americans to come together and push back against the examples of racism and bigotry that were soaked into the fabric of our daily lives. We didn’t solve racism, but we took a strong stand against it.

We saw a different reaction when it came to gender.

Throughout the 2008 campaign, many of the same people that were jumping to the defense of Barack Obama whenever there was even a scent of racism, were ignoring (or partaking in) subtle sexism against women candidates. Hillary Clinton — and Sarah Palin in the general election — were constantly faced with demeaning and belittling commentary that you’d expect more in junior high school than on the presidential campaign trail.

Was Hillary Clinton where she was only because of her husband? Was she being too emotional? Could Sarah Palin be Vice President with children at home? What about their appearance? These were the types of questions being posed to and about women, but not about men.

And it wasn’t just the candidates. There were more than a few women journalists on the Clinton campaign bus who, after a long day on the trail, would vent about this unfairness and double standard. “You should say something,” I replied to each. But too many of them said the same thing — they couldn’t, if they wanted to be taken seriously in their news rooms.

Now here we are, eight years later. Hillary Clinton is running for President again. So is Carly Fiorina on the Republican side. Whatever you think of their politics, both are serious contenders.

And Donald Trump is running as well.

For weeks, Trump was confounding the political establishment with his meteoric rise. Right out of the box, people said he was done when he insulted immigrants. Instead, his poll numbers rose.

People said he was done when he then insulted John McCain and veterans. But his poll numbers continued to rise even higher.

Then came the first debate. And moderator Megyn Kelly asked her question about his long history of disparaging comments against women. And, true to form, Trump belittled the question — saying he didn’t have time for “political correctness.” Besides, he said, he only said that about Rosie O’Donnell.

The audience laughed. None of the other candidates on stage said a word. Some analysts publicly said he handled that tough question very well.

Most women I talked to disagreed.

What Kelly was referring to, was his long record of calling women (not just Rosie O’Donnell) “pigs, dogs, slobs and disgusting animals.” Of saying that some women looked “better on their knees.”

Then the next day, as if to put an exclamation point on it, Trump insinuated to CNN that Kelly was tough on him because of the “blood coming out of her whatever.” (And that was after 24 hours of terribly sexist comments directed at her by Trump supporters.)

Finally, we got some outrage. Apparently, attacking Megyn Kelly — one of the most respected journalists in the country, who also happens to have broad appeal among conservatives — was the line that couldn’t be crossed.

Mind you, many of the people showing outrage (on both sides of the aisle) have been silent (or in some cases complicit) when sexist comments were directed at Hillary Clinton, Nancy Pelosi, Michelle Obama, Carly Florina, Sarah Palin, or any of the many other women leaders of our time.

Maybe Trump is right. Maybe the outrage against his statements and response can be chalked up to the overhyped reaction of politically-correct “idiots.” Maybe that kind of “straight” and “tough” talk is exactly what America needs to get back on track.

Or, maybe that outrage is a sign that America is finally saying it’s had enough locker-room banter posing as political dialogue.

I don’t know. But it won’t be long before the Donald Trump v Megyn Kelly dust-up settles. By this time next year, it will simply be a singular moment that historians write about in their books about the path to the presidency 2016.

I just hope this conversation doesn’t end once this moment fades into political memory. It needs to be just getting started.

While recent tragic events prove that we still have a long way to go on race, the more-than-symbolic lowering of the Confederate Flag in South Carolina demonstrated that we are becoming less willing to hide behind “heritage” as an excuse for racial injustice.

The dramatic and rapid change in our collective acceptance of same-sex marriage over the past 10 years, reflects that we are becoming less tolerant of bigotry against the LGBTQ community.

Seven years ago a lot of people were asking whether America was ready for a woman President. Today, the question is whether we are willing to tolerate an openly sexist one.

And for forcing that discussion, we ought to thank Donald Trump. 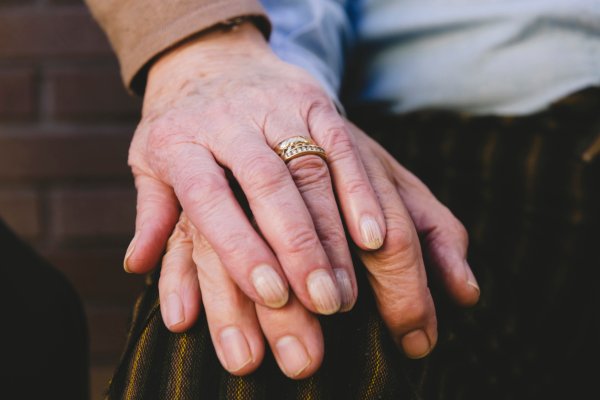 Couple Married for 75 Years Say They’ve Never Had an Argument
Next Up: Editor's Pick