The Truth About Donald Trump's Narcissism

Even as the comet that is The Donald continues to streak across the political sky—as babes peer in wonder out their windows, dogs bay in fear in the night and scholars debate the source of the great apparition—it’s worth taking a moment to feel some compassion for the man who’s causing all the mischief.

The fact is, it can’t be easy to wake up every day and discover that you’re still Donald Trump. You were Trump yesterday, you’re Trump today, and barring some extraordinary development, you’ll be Trump tomorrow.

There are, certainly, compensations to being Donald Trump. You’re fabulously wealthy; you have a lifetime pass to help yourself to younger and younger wives, even as you get older and older—a two-way Benjamin Button dynamic that is equal parts enviable and grotesque. You own homes in Manhattan; Palm Beach; upstate New York; Charlottesville, Virginia; and Rancho Palos Verdes, California; and you’re free to bunk down in a grand suite in practically any hotel, apartment building or resort that flies the Trump flag, anywhere on the planet—and there are a lot of them.

But none of that changes the reality of waking up every morning, looking in the bathroom mirror, and seeing Donald Trump staring back at you. And no, it’s not the hair; that, after all, is a choice—one that may be hard for most people to understand, but a choice all the same, and there’s a certain who-asked-you confidence in continuing to make it. The problem with being Trump is the same thing that explains the enormous fame and success of Trump: a naked neediness, a certain shamelessness, an insatiable hunger to be the largest, loudest, most honkingly conspicuous presence in any room—the great, braying Trumpness of Trump—and that’s probably far less of a revel than it seems.

Contented people, well-grounded people, people at ease inside their skin, just don’t behave the way Trump does. The shorthand—and increasingly lazy—description for Trump in recent weeks is that he is the id of the Republican party, and there’s some truth in that. Trump indeed appears to be emotionally incontinent, a man wholly without—you should pardon the expression—any psychic sphincter. The boundary most people draw between thought and speech, between emotion and action, does not appear to exist for Trump. He says what he wants to say, insults whom he wants to insult, and never, ever considers apology or retreat.

But that’s not someone driven by the pleasures of the id—which, whatever else you can say about it, is a thing of happy appetites and uncaring impulses. It’s far more someone driven by the rage and pain and emotional brittleness of narcissism, and everywhere in Trump’s life are the signs of what a fraught state of mind that can be.

There is Trump’s compulsive use of superlatives—especially when he’s talking about his own accomplishments. Maybe what he’s building or selling really is the greatest, the grandest, the biggest, the best, but if that’s so, let the product do the talking. If it can’t, maybe it ain’t so great.

There’s the compulsive promotion of the Trump name. Other giants of commerce and industry use their own names sparingly—even when they’re businesspeople who have the opportunity to turn themselves from a person into a brand. There is no GatesWare software, no BezosBooks.com; it’s not Zuckerbook you log onto a dozen times a day.

But the Trump name is everywhere in the Trump world, and there’s a reason for that. You can look at something you’ve built with quiet pride and know it’s yours, or you can look at it worriedly, insecurely, fretting that someone, somewhere may not know that you created it—diminishing you in the process. And so you stamp what you build with two-story letters identifying who you are— like a child writing his name on a baseball glove—just to make sure there’s no misunderstanding.

On occasion, there is an almost—almost—endearing cluelessness to the primal way Trump signals his pride in himself. He poses for pictures with his suit jacket flaring open, his hands on his hips, index and ring fingers pointing inevitably groinward—a great-ape fitness and genital display if ever there was one. After he bought the moribund Gulf+Western Building in New York City’s Columbus Circle, covered it in gold-colored glass, converted it into a luxury hotel and residence, and reinforced it with steel and concrete to make it less subject to swaying in the wind, Trump boasted to The New York Times that it was going to be “the stiffest building in the city.” If he was aware of his own psychic subtext, he gave no indication.

It’s not just real estate Trump seeks to own or at least control. There was his attempt to trademark the words “You’re fired,” after they became a catchphrase on his reality show, The Apprentice. There was his offer to donate $5 million to a charity of President Obama’s choosing if Obama would release his college transcripts to him, Donald Trump. In both cases, Trump wants something—possession, attention, the obeisance of no less than the President—and so he demands it. The behavior is less id than infant—the most narcissistic stage of the human life cycle.

The petulance of Trump’s public feuds—with Rosie ODonnell (“a total loser”), Seth Meyers (“He’s a stutterer”), Robert De Niro (“We’re not dealing with Albert Einstein”) and Arianna Huffington, (“Unattractive both inside and out. I fully understand why her former husband left her for a man . . .”)—is wholly of a piece with the fragility of the narcissistic ego. In Trump’s imaginings, it is Fox News’s Megyn Kelly who owes him an apology for asking pointed questions during the Republican debate, not Trump who owes Kelly an apology for his boorish behavior and school-yard Tweets (“Wow, @megynkelly really bombed tonight. People are going wild on twitter! Funny to watch”). As for his sneering misogyny—his reference to blood coming out of Kelly’s “wherever”? Nothing to see here. It’s Jeb Bush who really should apologize to women for his comments about defunding Planned Parenthood.

Trump was right on that score; Bush was indeed clueless to suggest that the annual cost of protecting women’s health should not be as high as $500 million—or just over $3.14 per American woman per year. So Bush did what people with at least some humility do: He acknowledged his mistake and at least tried to qualify the statement. That option, however, is closed for the narcissist. The overweening ego that defines the condition is often just a bit of misdirection intended to conceal the exact opposite—a deep well of insecurity and even self-loathing. Any admission of wrong shatters that masquerade.

To call Donald Trump a narcissist is, of course, to state the clinically obvious. There is the egotism of narcissism, the grandiosity of narcissism, the social obtuseness of narcissism. But if Trump is an easy target, he is also a pitiable one. Narcissism isn’t easy, it isn’t fun, it isn’t something to be waved off as a personal shortcoming that hurts only the narcissists themselves, any more than you can look at the drunk or philanderer or compulsive gambler and not see grief and regret in his future.

For now, yes, the Trump show is fun to watch. It will be less so if the carnival barker with his look-at-me antics continues to distract people from a serious discussion of important issues. It will be less still if Trump actually does wind up as the nominee of a major political party or mounts an independent campaign and succeeds in tipping the vote one way or the other.

But that kind of triumph is not the fate that awaits most narcissists. Their act becomes old, their opponents become bold, and the audience—inevitably—moves onto something else. Trump the phenomenon will surely become Trump the afterthought. He is a man who desperately hungers for respect and attention and who, by dint of that very desperation, will likely wind up with neither. The pain will be his; the relief will be ours.

Adapted from The Narcissist Next Door: Understanding the Monster in Your Family, in Your Office, in Your Bed—in Your World by Jeffrey Kluger by arrangement with Riverhead Books, a member of Penguin Group (USA) LLC, Copyright © 2015 by Jeffrey Kluger. 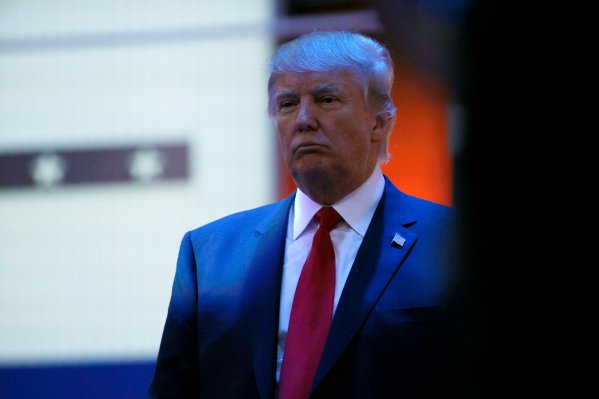 People Are Tweeting Donald Trump About Their Periods
Next Up: Editor's Pick