A woman flies Brazil's national flag on a boat during a protest in the Marina da Gloria in Rio de Janeiro on Aug. 8, 2015.
Leo Correa—AP
By Catherine Osborn / Rio de Janeiro

An unlikely boat brigade did a lap around Rio’s Guanabara Bay this weekend: racing shells, sailboats, schooners, and traditional line-and-hook fishing boats, with banners fluttering from their sides. They read “Living Bay,” and their chanting passengers called for the cleanup of waters where Olympic sailing trials begin on Saturday.

The Bay is scheduled to host the Olympic sailing events in 2016 but the government has not managed to adequately reduce the amount of raw sewage and industrial effluent that goes into the water. The Olympic sailing could be moved to another location but the millions of people will continue to live by this toxic body of water.

Rio residents have known since January that the government’s pledge, part of its pitch for the Olympics, to clean 80% of sewage going into the bay will not be met. Recent testing commissioned by the Associated Press found the water was so contaminated with human feces that Olympians risk becoming violently ill and unable to compete. In further evidence of dangerous pollution, 13 American rowers at an Olympic test event on the lagoon last weekend fell ill, and their team doctor said she suspected they were sickened by water-borne bacteria or virus.

While the water quality of the bay is dangerous for sports men and women, it affects local people every day. They joined with athletes at a weekend boat protest to pressure authorities to do more to clean the bay. The protesters included athletes and environmentalists but also fishermen who have lived and worked on the bay for generations.

Jorge Nunes de Souza, 60, is one of thousands of fishermen who learnt from his parents how to catch shrimp, anchovies, corvina and mullet from these waters, but now he tracks shrinking fish stocks so he can protest the effects of domestic and industrial waste on the water and fish. Rio’s oil industry has boomed in the last decade, which has led to Guanabara Bay receiving ever more runoff from new refineries and a petrochemical complex.

The success of the oil business has been partly at the expense of fishing. Federal University of Rio de Janeiro researcher Carla Ramôa Chaves found the number of traditional fishermen working in the bay fell from 4,774 in 1991 to 1,771 in 2010.

“In this economy, it’s hard to find a job elsewhere for people trained as fishermen,” says Nunes de Souza, “and there are very few opportunities in the high-poverty city outskirts that line a lot of the bay. I worry about the increasing number of young fishermen we lose to the drug traffic because they think a certain income is more likely there.”

Also on the protest was Isabel Swan, a Brazilian Olympic sailing medallist: “To find long-term solutions for a healthier bay, we need to consider everyone who is affected by the pollution. We all want a bay that’s alive. And Brazil deserves better than this,” she says.

Since 1995, the state of Rio has spent over a billion dollars on sewage treatment plants to reduce pollution in the bay. Through these projects, Rio pledged to hit its goal of 80% sewage treatment by 2016. For years, the plants sat idle or ran at partial capacity. Last week, Rio governor Luiz Pezão announced that 49% of sewage going into the bay was being treated and estimated that the bay could be cleaned by 2030.

Flavio Serafini, a Rio state congressman and boat protestor, said the governor had not announced a new plan, just a new deadline in order to avoid the blame. “Industrial waste is far less discussed than domestic waste, for example, but it is a huge issue that we’re trying to get better numbers on,” he says.

The boat protest closed with several musical performances, including a carnival marching band called “Nothing Should Seem Impossible to Change.” It is one of several politicized bands in Rio’s street carnival that make off-season appearances for special occasions. “Through culture, we’re trying to engage more people with this topic,” says Mayara Jaeger, 23, an environmental studies student who helped organize the protest. “When I demonstrated in the leadup to the World Cup, we were trying to build a critical view of mega-events. Now that criticism is widespread, so we’re trying to do what the mega-event does not, which is construct solutions for the city together with a diverse range of people.”

Jorge Nunes de Souza reflected that he’d been part of a boat protest before, of traditional fishermen against a trash-dumping neighbor in 2003. This is the first time he protested with an Olympic sailor. “It makes sense, though, because we’re both professionals of the bay,” he says. “Our tactics to get it clean before have not worked, so maybe this will.” 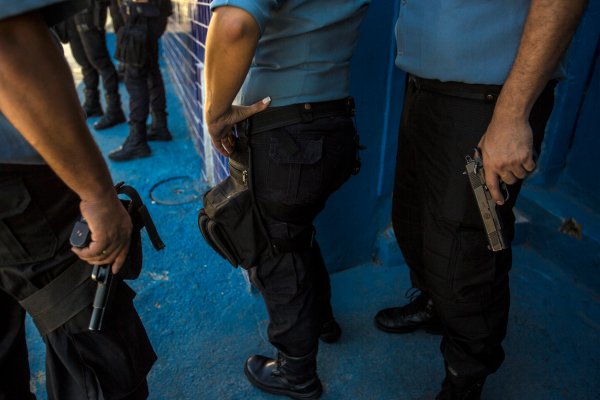 Police Killed 'Thousands' in Rio in Last Decade: Amnesty
Next Up: Editor's Pick