Why Salad in Space Matters

Yes, yes, there was a daring spacewalk outside the International Space Station on August 10, as cosmonauts Misha Kornienko and Gennady Padalka spent six hours performing a range of maintenance and inspection tasks.

Space has never been a place known for good eating. Certainly, the food now is better than it was in the pureed, shrink-wrapped, sucked-from-packets days of Mercury, Gemini and Apollo, and that says something. The ISS has hot water, a food heater and even a cappuccino maker, for instance. Scott Kelly, who is in the fifth month of a year in space, even tweeted down a picture of zero-g tacos he made for Cinco de Mayo.

But fresh fruits and vegetables, which take up room and spoil fast, are another matter. While apples and carrots are sometimes sent up on cargo ships (another occasion for a Kelly photo), those supply runs are infrequent, and when a ship fails to arrive—something that’s happened three times in the past year—the veggie fast can go on and on.

During longer trips into deep space—particularly to Mars—NASA knows that fresh produce is not only good for the crew’s physical health, but also for their mental well-being, giving them a comforting taste of home. That means growing the crops onboard.

To investigate how this could be done, NASA partnered with ORBITEC, a Madison, Wisconsin-based technology company, to develop a unit known straightforwardly as Veggie, which consists of both a growth chamber and so-called plant pillows containing pre-packaged seeds. The unit is collapsible, and includes a flat panel of red, blue and green LEDs. Technically, the first two colors are the only ones needed if your sole goal is to grow plants.

“Blue and red wavelengths are the minimum needed to get good plan growth,” said Ray Wheeler, lead scientist for Advanced Life Support at the Kennedy Space Center, in a NASA statement. “They are probably the most efficient in terms of electrical power conversion.”

But plants aren’t the only living things that factor into this equation. There are the human beings too, and the red-blue lights bathe the plants in a sickly purplish glow, making them altogether unappetizing until they’re harvested. So the green lights are added to, as Wheeler puts it, “enhance the human visual perception of the plants.”

Nothing, however, goes onto the astronauts’ menu—or into their bodies—without being rigorously tested first. So in May of 2014, an earlier crew germinated the first plant pillows, grew them for 33 days, then plucked and froze them and shipped them home on a returning spacecraft in October. Scientists on the ground certified them fit to eat, so Kelly germinated a new batch on July 7th and he and crewmates Kjell Lindgren and Kimiya Yui sampled them on August 10. They pronounced them fine.

There is one more reason to keep a garden running in space—and that explains why there are other pillows containing zinnia seeds aboard. The flowers are edible, yes, but they’re also beautiful and colorful and fun to tend. Gardening is a very earthly grace note and has long been thought of as a relaxing and satisfying way for astronauts to keep themselves busy on long-duration missions that can quickly settle into repetitiveness and drudgery.

“The farther and longer humans go away from Earth, the greater the need to be able to grow plants for food, atmosphere recycling and psychological benefits,” said Gioia Massa, Veggie’s payload scientist. “I think that plant systems will become important components of any long-duration exploration scenario.”

That’s a whole lot of expectation riding on what is, today, just a few leaves of red romaine. But early homesteaders got their start with just small garden plots too. There’s no reason their 21st century heirs can’t do the same.

TIME is producing a series of films about the yearlong mission of Kornienko and American astronaut Scott Kelly. Watch the series here. 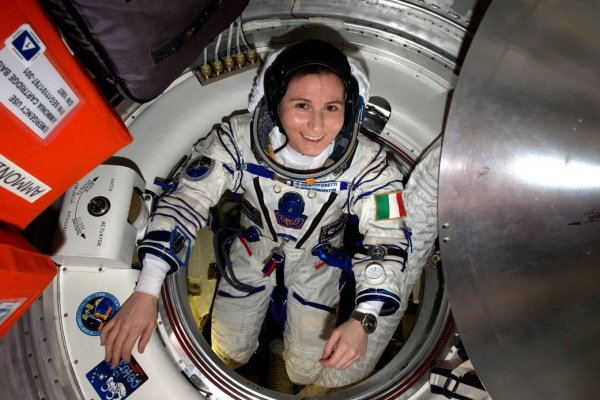 Meet the Woman Who Has Spent 200 Days in Space
Next Up: Editor's Pick