Trump's Remarks on Women Cost Him This Weekend

Erick Erickson knows what it’s like to be in the crosshairs over an intemperate remark. An influential conservative blogger and former CNN contributor, he’s taken heat over the years for accusing a Supreme Court justice of bestiality and joking that God “had a sense of humor” when he created feminists.

So his initial reaction when told Friday about Donald Trump’s latest controversial remarks was one of puzzlement. But by the end of the evening, he was leading the charge against the Republican frontrunner over his attitude towards women.

Erickson had just returned from a family dinner to the Grand Hyatt hotel in Atlanta, across from where supporters of his website RedState.com were meeting for an annual conference. Several contributors pulled him aside and told him that Trump had just made a seeming reference to menstruation when complaining about a female Fox News host’s questions during Thursday’s debate.

“I didn’t believe them when they told me, so they pulled up the video,” he told TIME. “And they told me, ‘We don’t really want him on stage.’”

The video shows Trump, whose name once graced a casino in Atlantic City, doing the textbook definition of doubling down. After Fox News host Megyn Kelly quizzed Trump at Thursday’s Republican debate over derogatory comments he’s made about women, he blasted her in a CNN interview the next day, arguing she had “blood coming out of her wherever” during the debate.

While Erickson was having dinner across the street from the Hyatt, a group of influential conservatives allies were quickly reaching a consensus that Trump’s latest remarks went over the line.

Among the most vocal critics of Trump’s remarks, according to several people involved in the discussions, were two conservative media rising-stars, Townhall’s Katie Pavlich and HotAir’s Mary Katharine Ham, both Fox News contributors and employees of RedState’s sister sites. Over texts and emails, they helped organize a push to disinvite Trump from the RedState Gathering, telling their colleagues they didn’t want to be on a stage that also welcomed him. Erickson said he was already inclined to disinvite Trump once he saw the video, but he credited his female colleagues with influencing his decision.

Erickson had already tried to minimize Trump’s presence at the event, which also featured speeches by nine other Republican presidential candidates, including former Florida Gov. Jeb Bush and Wisconsin Gov. Scott Walker. They offered him a 9 a.m. speaking slot on the morning after the debate, hoping for minimal media coverage as reporters slept off Thursday night’s debate. When Trump balked at that time, they scheduled him for a Saturday evening tailgate, a more informal event that would have kept his remarks shorter.

Still, Trump was asked to attend. Erickson had kept the invitation open even after the real estate mogul said in mid-June that many immigrants who enter the country illegally from Mexico are “rapists.” He had maintained Trump’s spot on the stage even after he questioned whether Sen. John McCain was a “war hero.”

And on late Friday, he gave the Trump campaign one more chance, asking his staff if he wanted to clarify his remarks. But when they rejected the offer, Erickson informed Trump campaign manager Corey Lewandowski that his boss was no longer welcome. And then he went public and he didn’t hold back.

“Most of the dumb things he’s said, they have been about policy, going after other politicians,” Erickson explained, saying he had been giving Trump “a great deal of latitude.” “But this was a reporter who asked him a tough question. She was doing her job, and his response was ‘she must be hormonal.’”

“I don’t want my daughter, I don’t want any of the women in the crowd to be there with a guy who if they ask him a tough question his response is they must be on their period,” he added.

The reaction from Trump-world was swift. His supporters flooding social media, calling Erickson—who has launched crusades against most of the Republican establishment at one point or another—a Republican-in-name-only. When Erickson descended from his hotel suite into the lobby Saturday morning, a handful of conference attendees were waiting to accost him over the snub.

But Erickson had a plan. When he interrupted the official schedule for 15 minutes to explain his decision to disinvite Trump, he ignored a smattering of boos to show the CNN clip in its entirely from the massive screens in the hotel ballroom. For the rest of the day, he also engaged in a bit of performance art, taking the stage to read a selection of angry, expletive-laden emails he received from Trump supporters.

“They will burn all of us and the party down if we’re not willing to say it’s unacceptable,” Erickson told the crowd of more than 800. By and large, it had the desired effect. At least two of the people who confronted him earlier in the day later apologized after they had seen the full clip.

Still, some Trump supporters in the crowd of grassroots conservatives stayed on his side. Michael Pemberton, of Radcliff, Kentucky, spent the day wearing a hand-written “I am Donald Trump” sign pinned to his jacket with an American flag pin, claiming to appropriate the slogan used after the Charlie Hebdo massacre. “The Grand Old Party is not what it used to be, and we don’t silence people,” he said. “I want a man with guts who will say what he thinks, and Donald Trump does that.”

Another woman told Erickson he “should be ashamed” of himself for booting Trump, as she walked out of what was supposed to be a Trump event with a refund in hand.

Throughout the day Saturday, Trump’s Republican rivals lined up to criticize him. “As a party, we are better to risk losing without Donald Trump than trying to win with him,” South Carolina Sen. Lindsey Graham said. “Enough already with Mr. Trump.” Carly Fiorina, the only woman in the GOP race, tweeted late Friday, “Mr. Trump: There. Is. No. Excuse.”

“Give me a break,” former Florida Gov. Jeb Bush said in a well-received RedState address, going out of his way to praise Erickson for his action. “Do we want to win? Do we want to insult 53 percent of all voters? What Donald Trump said is wrong.”

The fallout led to the resignation or firing of one of Trump’s closest political aides, former Richard Nixon hatchet-man Roger Stone, who called the Kelly comments a distraction from the campaign’s message.

Trump has been left for dead before, written off, only to grow stronger. It is too soon to tell whether this particular fight will mark the start of his decline. But Erickson says he now believes Trump is a summer fling whose time in the sun is expiring. Conservatives, he says, “are going to get serious now.” 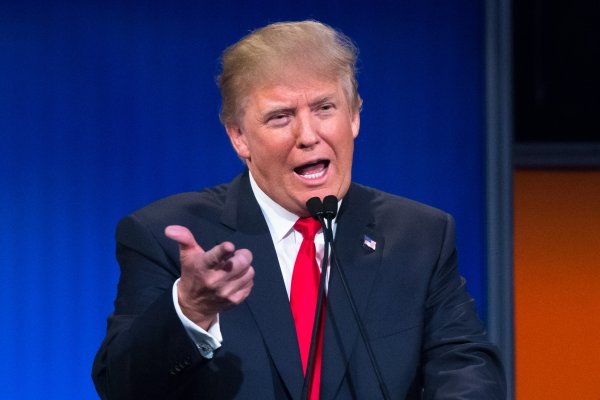 Trump Fires Back After Outrage Over Remarks
Next Up: Editor's Pick