Marissa Johnson, left, speaks as Mara Jacqueline Willaford stands with her and Democratic presidential candidate Sen. Bernie Sanders, I-Vt., stands nearby as the two women take over the microphone at a rally on Aug. 8, 2015, in downtown Seattle.
Elaine Thompson—AP
By Tanya Basu

Black Lives Matter activists interrupted Democratic presidential candidate Bernie Sanders at a rally in Seattle, stopping the politician from speaking at the first of two engagements he attended on Saturday.

The activists took over the rally at a city park, marking the anniversary of Social Security and Medicare, before Sanders could even speak, according to The Hill. Two women and a man from a Seattle chapter of Black Lives Matter shoved Sanders aside, grabbed the microphone, and addressed the crowd. After some confusion, campaign officials allowed the group to take the stage for four and a half minutes to commemorate the four and a half hours Michael Brown lay in the streets of Ferguson, Mo., last year after being shot by a police officer.

Sunday marks the one year anniversary of Brown’s death, which helped launch the Black Lives Matter movement and a national conversation to address police brutality.

“Bernie says that he’s all about the people and about grassroots,” a protester identifying herself as Marissa Johnson, told the attendees. “The biggest grassroots movement in this country right now is Black Lives Matter.”

Sanders released a statement expressing his disappointment at not being able to speak at the rally.

“I was especially disappointed because on criminal justice reform and the need to fight racism there is no other candidate for president who will fight harder than me,” he said. 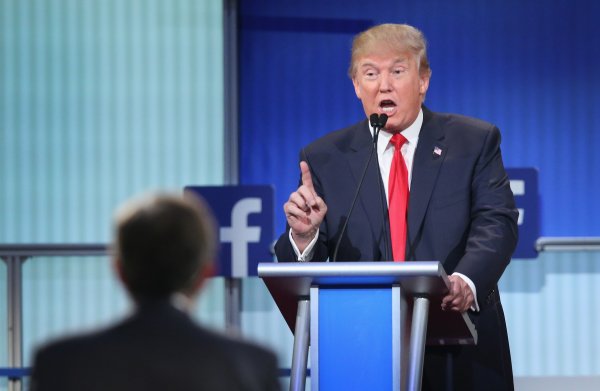 Donald Trump: 'I Will Be Phenomenal to the Women'
Next Up: Editor's Pick