Donald Trump Fires Back After Outrage Over Megyn Kelly Remarks

The real estate mogul’s invitation to this weekend’s RedState Gathering has been revoked, according to host Erick Erickson. Trump had been scheduled to appear at a tailgate at the College Football Hall of Fame with the conservative group on Saturday.

On Friday, Trump told CNN that Fox host Megyn Kelly was “off base” in her questions during Thursday’s Republican debate, in which she pressed him over some of his past remarks on women.

In a statement, a Trump campaign spokesman criticized Erickson’s decision, pledging to stand by the planned trip to Georgia.

“This is just another example of weakness through being politically correct. For all of the people who were looking forward to Mr. Trump coming, we will miss you. Blame Erick Erickson, your weak and pathetic leader. We’ll now be doing another campaign stop at another location,” he said.

In response to Trump’s statement, Erickson fired back, telling TIME, “I think it’s probably more pathetic to interpret a reporters’ tough question as the product of hormones.”

“To suggest that the person who’s asking him the question has a hormone problem, doesn’t suggest that he’s tough, it suggests that he’s a bully,” he added. He also argued that Trump had “disqualified himself” and said this is “the beginning of the end” of his campaign.

On Saturday morning, Trump released a statement criticizing Erickson, adding anyone suggesting Trump was referring to menstruation was “a deviant.”

“Mr. Trump made Megyn Kelly look really bad—she was a mess with her anger and totally caught off guard,” Trump said. “Mr. Trump said “blood was coming out of her eyes and whatever” meaning nose, but wanted to move on to more important topics. Only a deviant would think anything else.”

Erickson said that he has tried to give Trump “a great deal of latitude” in his presidential run, but the latest remark crossed a line. He also said that he has invited Kelly to come in Trump’s place, but that she “probably can’t attend.”

Not yielding any ground, Trump noted that Erickson has a history of making controversial statements about he’s had to apologize for. “Not only is Erick a total loser, he has a history of supporting establishment losers in failed campaigns so it is an honor to be uninvited from his event,” he said. “Mr. Trump is an outsider and does not fit his agenda.”

During Thursday’s debate, Kelly had challenged the way Trump talks about women, noting that he’s called women he doesn’t like “fat pigs,dogs, slobs and disgusting animals.” Trump responded to the question by saying he didn’t have time for “political correctness,” then complained immediately after the debate about Kelly’s questions.

The dust-up is the second time that Trump’s remarks have stirred up trouble within the conservative movement. In July, a number of conservatives were also moved to condemn him for suggesting that Sen. John McCain was not a war hero because he was captured.

In a statement, presidential candidate Sen. Lindsey Graham said is time for the GOP to stop courting Trump. “As a party, we are better to risk losing without Donald Trump than trying to win with him,” he said. “Enough already with Mr. Trump.” 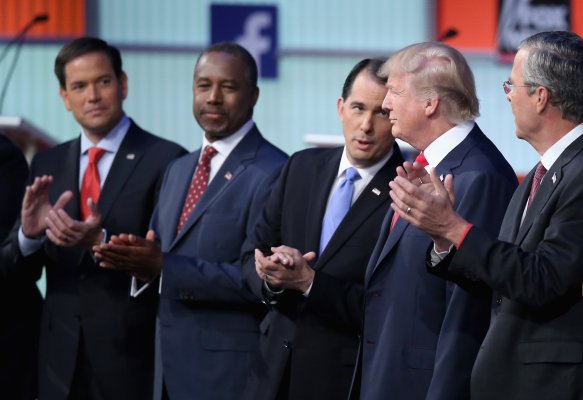