Donald Trump dominated airtime during the first GOP debate on the night of August 6, to no one’s surprise. And Americans were listening: the unprecedented 16 percent of households with televisions that tuned into the Fox News program exposed themselves to a cumulative 11 minutes and 14 seconds of Trump talk.

The current GOP frontrunner thundered his political agenda and his own feelings on just about every topic any of the 10 candidates touched. It certainly was not the first time the real estate tycoon has expressed himself with little, if any, filter. Here’s a look back at some of his most consequential statements:

On the death penalty and policing

Trump: “I hate seeing this country go to hell. We’re laughed at by the rest of the world. In order to bring law and order back into our cities, we need the death penalty and authority given back to the police. I got fifteen thousand positive letters on the death-penalty ad. I got ten negative or slightly negative ones.”

Playboy: “You believe in an eye for an eye?”

Trump: “When a man or woman cold-bloodedly murders, he or she should pay. It sets an example. Nobody can make the argument that the death penalty isn’t a deterrent. Either it will be brought back swiftly or our society will rot away. It is rotting away.”

On Obama and Baltimore:

“Our great African American President hasn’t exactly had a positive impact on the thugs who are so happily and openly destroying Baltimore!”

On estimating his own self-worth

“I’m a private company, so nobody knows what I’m worth. And the one thing is that when you run, you have to announce and certify to all sorts of governmental authorities your net worth…So I have a total net worth, and now with the increase, it’ll be well-over $10 billion. But here, a total net worth of—net worth, not assets—a net worth, after all debt, after all expenses, the greatest assets…So the total is $8,737,540,000.”

“‘Who the f— knows? I mean, really, who knows how much the Japs will pay for Manhattan property these days?”

“I’d throw a tax on every Mercedes-Benz rolling into this country and on all Japanese products, and we’d have wonderful allies again.”

(When asked what his first action as President would be, Playboy Interview, March 1990)

On touching, while first considering a presidential campaign

(TIME, “Searching for an alternative to the classic grip-and-grin,” November 1999)

“I’ve said if Ivanka weren’t my daughter, perhaps I’d be dating her.”

On the number of Representatives in the House

“Well, I don’t want to answer your questions because this isn’t a history class…You could get some stiff that knows every one of those answers but is incapable of governing.”

(Knowing Your Value: Women, Money, and Getting What You’re Worth by Mika Brzezinski, quoted in a May 2011 TIME article)

On treating aid workers with Ebola

“Ebola patient will be brought to the U.S. in a few days — Now I know for sure that our leaders are incompetent. KEEP THEM OUT OF HERE!”

On his party affiliation

“Well, if I ever ran for office, I’d do better as a Democrat than as a Republican — and that’s not because I’d be more liberal, because I’m conservative. But the working guy would elect me. He likes me. When I walk down the street, those cabbies start yelling out their windows.”

On his political ambitions:

“I have no intention of running for President.”

Playboy: “Wait. If you believe that the public shares these views, and that you could do the job, why not consider running for President?”

Trump: “I’d do the job as well as or better than anyone else. It’s my hope that George Bush can do a great job.”

Playboy: “You categorically don’t want to be President?”

TRUMP: I don’t want to be President. I’m one hundred percent sure. I’d change my mind only if I saw this country continue to go down the tubes.

“I am officially running for President of the United States, and we are going to make our country great again.” 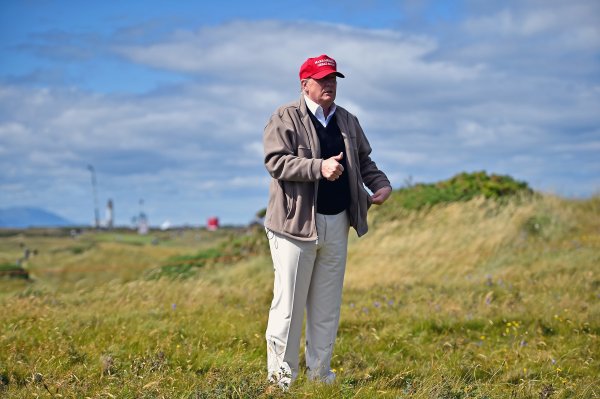