What You Missed While Not Watching the Primetime Republican Debate

-5 minutes. “Why don’t we bring them on stage?” says Fox News host Megyn Kelly, who has gone live with coverage of the debate she plans to moderate in just a few minutes. It all feels a bit improper, like watching someone get dressed before a performance. And the candidates don’t seem to like it too much, because they are not coming on stage.

-3 minutes. Finally they lumber out, men in dark suits. They stand before Kelly and the other moderators and a ravenous audience of thousands unsure what to do. “You guys nervous?” Kelly asks. Former Florida Gov. Jeb Bush immediately nods his head. No one else does. Real estate celebrity Donald Trump sticks out his hand and wiggles it back and forth. A little bit, he means.

0 minutes. Graphics signal the magical passage from a show about a debate that has not started to the start of a debate. All 10 candidates are behind their podiums now, and get introduced. Trump, in the middle, waves, not like a Miss America wave or anything. Wisconsin Gov. Scott Walker winks. Ohio Gov. John Kasich gets a standing ovation, because he is in Ohio. Fox Host Bret Baier tells the crowd to cheer at a volume “between a reaction to a LeBron James dunk and the Cleveland Public Library across the street.” Translation: As loud as you can.

3 minutes. First question is for everyone. Raise your hand if you are unwilling to pledge not to run an independent campaign and promise to support the GOP nominee. It’s a set up. Trump has no choice but to walk into the trap, amid boos. His hand goes up. He can’t really explain himself either. “If I’m the nominee, I will pledge I will not run as an independent,” he says. This is like vowing to not be alive if he dies.

5 minutes. Kentucky Sen. Rand Paul can’t contain his outrage. “This is what is wrong!” he shouts out of turn. “He’s already hedging his bets because he’s used to buying politicians.” Trump seems unfazed, but he has been wounded. The crowd is still booing. The man who walked on stage the frontrunner has just been outed as a possible turncoat.

6 minutes. Neurosurgeon Ben Carson gets the first why-do-you-suck question. He said Alan Greenspan was a Treasury Secretary, didn’t know the states in NATO and could not identify the Israeli political parties. “Aren’t these basic mistakes?” asks Kelly. “The thing that is probably most important is having a brain, and to be able to figure things out and learn things very rapidly,” the brain surgeon says, which sounds like an admission of guilt.

7 minutes. Florida Sen. Marco Rubio gets the next question about his lack of executive experience. His answer is a prose poem about the state of the economy, and his ability to match up against Hillary Clinton. He is better communicator than any Republican who ran for president in 2012. “If I’m our nominee, we will be the party of the future,” he says.

8 minutes. Bush goes next, with a question about the burdens of dynasty. He gets all the words right in his answer, but coming after Rubio’s polish there is something unsettled in the presentation. Bush is just not really comfortable on stage. It’s like he is playing a role he is still learning. “I am my own man,” he says. Yep.

10 minutes. The pummeling of Trump continues. “You’ve called women you don’t like fat pigs, dogs, slobs and disgusting animals,” says Kelly. “Only Rosie O’Donnell,” Trump counters, but it won’t get him out of the jam. “You once told a contestant on Celebrity Apprentice it would be a pretty picture to see her on her knees,” Kelly continues, like a surgeon. “What I say is what I say,” Trump says. “I’ve been very nice to you, although I could probably maybe not be based on the way you have treated me. But I wouldn’t do that.” Asked about his insults of women, he jokes about insulting a woman. He is what he is.

13 minutes. Texas Sen. Ted Cruz gets a chance to talk about how voters want politicians like him who “speak the truth.” New Jersey Gov. Chris Christie gets a chance to defend his economic record. Walker gets to talk about his pro-life views. Former Arkansas Gov. Mike Huckabee rounds it out by saying the next President should declare inseminated human eggs people under the Fifth and Fourteenth Amendments “at the moment of conception.” The Supreme Court, of course, might not go along.

19 minutes. More rapid fire. Paul declines an opportunity to attack his fellow Republicans for their foreign policy. Kasich defends his decision to expand Medicaid in Ohio. Bush defends his claim that most undocumented immigrants broke the law as “an act of love” for their families. Trump is asked for specific evidence that the Mexican government is sending criminals across the border. Trump starts saying “stupid” a lot. “Our leaders are stupid. Our politicians are stupid,” he says. “The Mexican government is much smarter.”

33 minutes. After a commercial break and some more immigration talk, Walker explains again why he changed his mind to oppose a path to citizenship for undocumented immigrants. “I actually listened to the American people.” By American people, he means Republican primary voters. In a recent NBC/Wall Street Journal poll, 47% of the country supported a pathway to citizenship, 17% supported some other legal status, and 32% supported deportation for undocumented immigrants.

35 minutes. Christie and Paul get into a shouting match over domestic spying powers. The big picture has to do with the National Security Agency’s program to collect metadata from virtually all American phone calls. The particulars have to do with the low regard these two men have for each other. “That’s a completely ridiculous answer,” Christie says to Paul. “Use the Fourth Amendment! Use the Fourth Amendment!” Paul starts shouting, coming across, as he often does, as younger than he actually is.

42 minutes. Bush is asked again if his brother’s war in Iraq was a mistake. He has his answer down now. “It was a mistake,” he says. “I would not have gone in.”

43 minutes. Walker gets a question about his claim that the U.S. needed to gain partners in the Arab world. “Which country not already in the U.S. coalition has the potential to be our greatest partner?” Kelly asks. It’s another killer question. She is wicked good. Walker bumbles through a response. “You look at Egypt,” he says, “probably the best relationship we’ve had in Israel, at least in my lifetime, incredibly important.” It’s hard to figure out what he meant to say.

44 minutes. The Fox News moderators won’t let up. Carson says he would not tell anyone if he liked waterboarding. Trump refuses to denounce his past support for single-payer healthcare in the Canadian model. This infuriates Paul again. “News flash, the Republican Party’s been fighting against a single-payer system,” he says, sounding once again like a teenager. Trump has a comeback. “You’re having a hard time tonight,” he says. Then he goes on to brag about all the money he has given politicians, and how he got Hillary Clinton to come to his daughter’s wedding. “I will tell you it is a broken system,” Trump says. The quid pro quo is just too easy.

49 minutes. Walker doesn’t like the way this is going. “We should be talking about Hillary Clinton,” he says, interupting. “Everywhere in the world that Hillary Clinton touched is more messed up today.” He apparently still feels bad for bungling his last foreign policy question. But the Fox moderators cut him off.

50 minutes. Huckabee talks about shrinking government. Carson talks about remaking the tax system to reflect biblical tithing. Rubio and Bush circle around the Common Core debate. And we get a second commercial break.

58 minutes. This is the halfway point. It feels like we have been going all day. But the issues just keep coming. Kasich gets to do his balanced budget speech. Bush gets to do his 4% economic growth speech. Walker has to defend his job creation record in Wisconsin. Huckabee and Christie get into a friendly back and forth about fixing entitlements. Huckabee, a preacher who knows how to wake up the pews, pitches a new consumption tax because it would force “illegals, prostitutes, pimps, drug dealers,” to pay taxes. “Sound’s like somebody’s a little R-rated,” Kelly observes. No one had “pimp” in their drinking game.

70 minutes. Everything moves so fast. Trump has to defend his businesses that went bankrupt. Huckabee gets to attack President Obama for attacking him for calling the Iran nuclear deal a step toward the gas chamber for Israel. Paul gets to call himself a Reagan conservative, which is not exactly spot on. Then Rubio is forced to defend his support of a bill with a rape and incest exception for an abortion ban. Rubio denies that he supports rape and incest exceptions, which could be a problem for him if he reaches the general election.

76 minutes. Trump talks about his own conversion on the issue of abortion. “Friends of mine years ago” almost aborted a child. “And that child today is a total superstar,” Trump says. Coincidentally, Trump’s own son, Baron, was born around the time of his change of heart. Just saying.

79 minutes. Bush says he never called Trump names like “clown” and “buffoon” to a donor, as has been reported, and Trump says of Bush, “He is a true gentleman. He really is.”

80 minutes. Kasich gets applause for saying that he attended a gay wedding, and would love his daughter just the same if she was gay. This is a big shift from the 2012 cycle, when a gay serviceman was booed for asking a question about gay rights.

86 minutes. More talk of Iran, of cyber attacks, of Russian President Putin being a bad guy and Obama being weak. Nothing surprising, except maybe that Walker answers a foreign policy question fluently.

92 minutes. Huckabee is asked about transgender rights in the military. “The military is not a social experiment,” he says. “The purpose of the military is to kill people and break things.” A lot of dark places you could go with that logic.

96 minutes. A bunch of candidates are asked about God. They all profess faith and devotion.

106 minutes. The closing statements basically continue the pattern. Rubio is the best at delivering his. Huckabee is funny. Trump is self-promoting. Bush is slightly awkward but passable. Carson brags about all the brains he worked on. Walker sounds disingenuous. “I’m a guy with a wife and two kids and a Harley,” he says, leaving out the fact that he is also a governor with personal security. But the bottom line, this is a strong Republican field, much stronger that the people who filled the stage in 2012.

Click here to read What You Missed While Not Watching the Republican Undercard Debate. 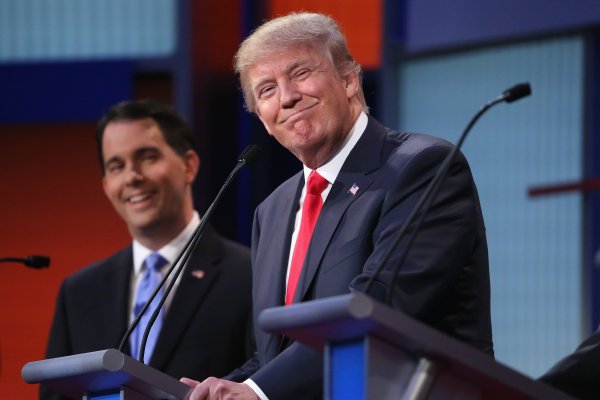 Here's Who Won the Style Debate
Next Up: Editor's Pick