Here's Who Won the Style Debate

Eric Wilson is the fashion news director at InStyle

Did you know that just under a decade ago Donald J. Trump was one of the most trusted men in American fashion? It’s true!

Sorry to bring this up after such a head-spinning night of American politics, what with the first big Republican debate and all, but it may help to explain the current fascination with “businessman Donald Trump,” as he is routinely described on Fox News. Trump, the leading contender in the Republican presidential primary—at least before Thursday night’s debate—was once actually considered a veritable fashion plate. In 2005, the marketing survey company Brand Keys noted his runaway success as “designer Donald Trump” after he introduced a line of Trump-branded suits at Macy’s. As with “The Apprentice,” really bossy guys who dismiss their opponents as “stupid” are also the ones who typically have great style.

Just look at Trump on that stage in Cleveland. How could you miss him, even among a panel of 10 almost identically besuited men? Navy suit, red tie, white shirt, American flag pin on his left lapel –what differentiated Trump from his competitors beyond his withering attacks and frizzling hair? It was quite possibly the fact that he was the only candidate who did not button his suit jacket for much of the time while he was standing on stage. That’s a small point, obviously, but on the under-scrutinized subject of sartorial choices among male politicians (as opposed to the oversaturated subject of First Lady fashion), even a button matters. The result, with Trump’s wild gesticulating as he reviled America’s leadership, was impressively powerful, emphasizing, rather gratuitously, the virility of his vibrantly red tie.

Or maybe he was just over-heated?

Frankly, it’s time we gave male politicians the same sort of fashion reviews to which female politicians and Beltway spouses have been subjected for decades. What would that look like, exactly? As the chosen 10 made their way onto the stage on Thursday night, it looked to be about as boring a display of suits as anyone would expect.

All of them wore snoozy single-breasted dark suits of navy, charcoal, or black. Half of them wore ties in shades of Republican red (in a major faux pas, Marco Rubio and Rand Paul wore identical outfits of solid red ties against baby blue shirts; Ben Carson showed a little more edge with his white-dotted red tie; Trump, loud as ever, went with vermillion; Jeb Bush, in a sartorial contrast to his motor-mouth responses, actually looked great in a mauve tie that was well matched to his muted mushroom gray suit.)

In the blue tie camp: Chris Christie wore an icy style that surely looked cooler than his drooping, swooping hairdo (was that a tribute to Springsteen or Grease?); the bland choices of Scott Walker and Mike Huckabee were as milquetoast at their performances (loved Huckabee’s sophisticated French cuffs, though), and the bright blue choice of John Kasich was very smart, at least for making his eyes pop. Ted Cruz, wearing a striped tie, was the Iris Apfel of Republicans.

Trump may have rehabilitated his fashion cred on Thursday night, but, of course, his fashion business has tanked since Macy’s dropped his collections in July after he described Mexican immigrants as “killers and rapists.” What did he expect?

At least no one (besides Brit Hume, anyway) made President Obama’s mistake of wearing a khaki suit on a serious occasion, but it’s worth noting that three of the candidates appeared on stage, shockingly, without the American flag appearing as a pin on their lapels. Neither Huckabee nor Cruz, nor Kasich, wore a pin, something that their competitors will surely notice. Christie, to his credit, added some flair to his outfit by wearing an American flag pin in the shape of the state of New Jersey. 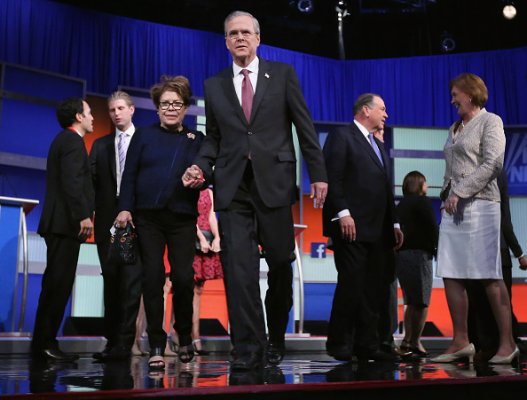 An Entertaining Introduction to the GOP Candidates
Next Up: Editor's Pick