With 10 candidates on stage, there’s a lot of room for debate over who won. But many viewers had a favorite before the debate had barely started: Fox News moderator Megyn Kelly.

The host of The Kelly File won applause inside the Quicken Loans Arena in Cleveland and plaudits on social media for asking tough questions of the Republican presidential hopefuls, especially on issues relating to women.

In the first round of questions, the host of The Kelly File went after real estate mogul Donald Trump, who stood at center stage and at the top of polls of the Republican field.

“Mr. Trump, one of the things people love about you is you speak your mind and you don’t use a politician’s filter,” she said. “However, that is not without its downsides, in particular, when it comes to women. You’ve called women you don’t like, ‘fat pigs,’ ‘dogs,’ slobs, and disgusting animals.”

Trump interjected with a quip: “Only Rosie O’Donnell,” he said, of the liberal TV personality he’s sparred with in the past.

Kelly pressed on. “No, it wasn’t,” she said. “Your Twitter account has several disparaging comments about women’s looks. You once told a contestant on Celebrity Apprentice it would be a pretty picture to see her on her knees. Does that sound to you like the temperament of a man we should elect as president, and how will you answer the charge from Hillary Clinton, who was likely to be the Democratic nominee, that you are part of the war on women?”

Trump responded by arguing that “the big problem this country has is being politically correct.”

“Frankly, what I say, and oftentimes it’s fun, it’s kidding,” he said. “We have a good time. What I say is what I say. And honestly Megyn, if you don’t like it, I’m sorry.”

Both Kelly and Trump drew applause during the exchange from the audience in the arena. And on Twitter, everyone from Texas Gov. Greg Abbott to conversative author Kristen Soltis Anderson and Chelsea Clinton praised Kelly.

That wasn’t Kelly’s only tough question of the debate.

She pressed Wisconsin Gov. Scott Walker on his strict abortion stance: “Would you really let a mother die, rather than having an abortion?”

She questioned Ohio Gov. John Kasich, who justified expanding Medicaid in Ohio by arguing that he would be able to talk to St. Peter at the pearly gates about it. “Why should Republican voters, who generally want to shrink government, believe you won’t use your Saint Peter analogy to expand all government?” she asked. She also asked him, “If you had a son or daughter who was gay or lesbian, how would you explain to them your opposition to same sex marriage?”

And she asked former Florida Gov. Jeb Bush about saying that his brother’s decision to go into Iraq was a mistake: “To the families of those who died in that war… How do you look at them now and say your brother’s war was a mistake?” 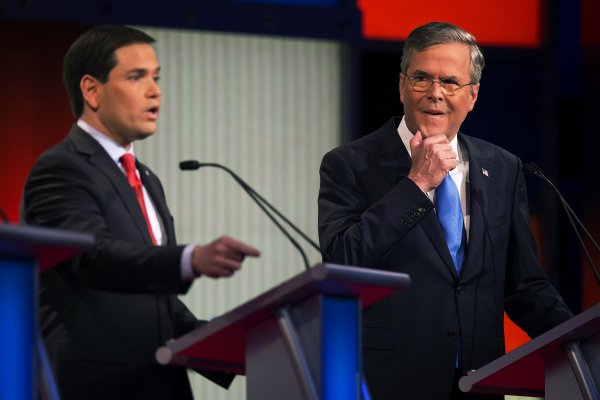 Finally a Worthy Republican Debate in World Without Donald Trump
Next Up: Editor's Pick