California Court Gets One Step Closer to Deciding Uber's Fate

For Uber’s lawyers, the case heard before theirs in a San Francisco courtroom on Thursday may have looked like a harbinger of future woes.

California Northern District Judge Edward Chen was going over the details of a $227 million settlement that FedEx, a 44-year-old company with close to the same value as 6-year-old Uber, agreed to pay earlier this summer. That payout should end an argument over whether FedEx misclassified 2,100 drivers as independent contractors in California and thus denied them benefits that employees get like overtime pay, reimbursed expenses and meal breaks. Soon Uber’s lawyers would be before the same judge arguing about the same classification question — with respect to about 75 times that many drivers.

At stake in a suit that could shape the future of the on-demand and sharing economies was the question of whether 160,000 Uber drivers in California can be treated as a single class. Uber’s lawyers argued that they cannot, that there is no such thing as a “typical” Uber driver and that it would make more sense for each driver to bring their own case — an expensive undertaking that most drivers likely wouldn’t pursue.

On the other side was Boston-based lawyer “Sledgehammer Shannon” Liss-Riordan, who spent a long, heated afternoon arguing that three Uber drivers should be able to stand in for all current and former drivers in the state. If Chen sides with her when he rules in the coming weeks, that would make this single suit potentially worth billions and capable of setting a precedent that sends other startups reeling to revamp their business models.

Following in Uber’s tracks, a long string of startups have shaped their business models around treating drivers or couriers or cleaners as independent contractors rather than employees. That’s a much cheaper proposition but it requires that companies give up control. While contractors legally can’t be told when or how to work, they also don’t have to be paid minimum wage or given money for the gas they use on the job. Uber doesn’t have to shell out any payroll taxes for independent contractors or pay them workers’ compensation.

Liss-Riordan, who was given her nickname by American Airlines skycaps after winning them a six-figure settlement in a wage-and-hour case, argue that Uber is really an transportation company using technology to pose as mere software licenser in order to save money and unfairly compete. The company exercises the kinds of control that employers do, she has argued, setting the rates that drivers earn per mile, telling them which models of cars they can drive and kicking them off the platform for getting low ratings.

In the arguments over the diversity of Uber drivers in California, questions arose about what all the drivers want — and whether it matters. Theodore Boutrous presented some 400 declarations from drivers who said they loved being contractors, that they didn’t want their status to change, that they cherished the freedom that their status affords them. If they were employees, “the business model would have to change,” Boutrous warned, “and there would be rigid schedules and this flexibility and this autonomy couldn’t exist.”

Liss-Riordan countered by offering a declaration from her paralegal, who had called about 50 of those drivers to ask if they understood the stakes. “They didn’t realize they could be reimbursed for expenses,” she said. “They didn’t really understand what this was about.” Chen questioned Boutrous’ claim that their flexibility would have to evaporate if they were reclassified, saying those drivers may have been under the impression that things would have to change rather than be within Uber’s discretion to change.

A growing group of startups who began their lives using the contractor model are reverting to more traditional employment, saying that they’re willing to pay the extra costs to have more direct control over their workers and their process. Curtis Lee, CEO of on-demand valet company Luxe, says that they hope that as employees their valets will be more likely to stick around and be more dedicated to the company. They still will not be required to work a minimum or maximum amount of hours as employees, he says, though they will start scheduling them in shifts. Lee also says that he doesn’t think the conversion is right or fair to force on every company. “For Uber, it’s a totally different situation,” he says.

Boutrous spent his day arguing that point, cataloging how some the 160,000 have agreed to 17 different terms of agreement, some of which forbade them from driving for other companies like Lyft while their Uber app is on (which many drivers do). He detailed how some have used Uber to start their own small businesses while others turn on the app just a few hours per week. While some of them do rely on Uber to make a living, others use it for a little extra cash or to make their car payments. “These are real live human beings who vary widely,” he says. “It’s a hornet’s nest.”

The day ended with Chen inviting the lawyers for the two remaining cases on the docket to approach the bench. Like Liss-Riordan, both of them were arguing cases against Uber, involving issues like how the company conducted background checks. Boutrous stood and reintroduced himself as the counsel representing the company in case after case. If Chen rules that the 160,000 drivers can go ahead as a class, that might make Uber more seriously consider settling that suit amidst its own hornet’s nest of legal troubles. 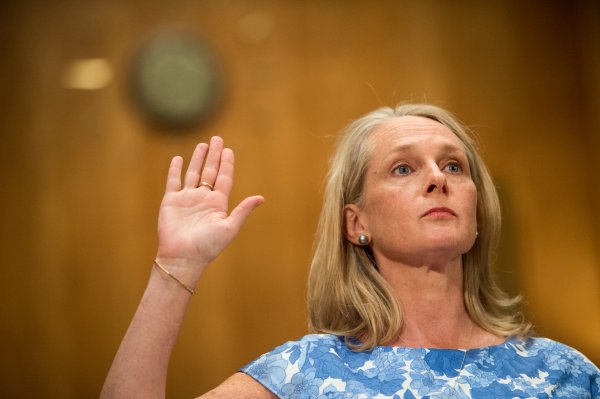 Orange Is the New Black Author Testifies Before Congress
Next Up: Editor's Pick