What You Missed While Not Watching the Republican Undercard Debate

0 minutes. You have waited long enough, flipping the channels, hoping, praying, replaying the memories. It’s been 1,018 days since the last presidential debate. 1,018 lonely, agonizing days since the last time you really knew who you were, what this country could be, the joy of televised democracy in action. But that’s all about to change. “It is debate night,” says Fox News anchor Bill Hemmer. Welcome back, America. The healing starts now.

1 minute. There are graphics with stars, hues of blue and red, little sparkly explosions. This one is special, live from a Cleveland basketball arena that fits 20,000 fans. Not one debate but two, not two hours but three, not 10 candidates but 17. The anchors welcome the first Republicans to the stage, but instead of fanfare and relief, something is horribly wrong. There is silence, emptiness, sadness, as if an evil spirit is haunting the stage. Former Hewlett-Packard executive Carly Fiorina looks uncomfortable. Sen. Lindsey Graham smiles, in a lonely, brave way. When Texas Governor Rick Perry is introduced, a few people far away offer a golf clap. Maybe six people smack hands for former New York Gov. George Pataki. Then the wide shot shows the culprit: Fox News never filled the arena. There is no audience.

2 minutes. Onward anyway. To Perry, a.k.a. Governor “Oops,” who will finally have his chance at redemption, with bold glasses and no back pain pills. “You recently said that four years ago you weren’t ready for this job,” Hemmer says. “Why should someone voter for you now?” Perry has waited for this moment, prepared for it, visualized it in his mind. Redemption is nigh. He begins: “After those four years of looking back and being prepared, the preparation to be the most powerful individual in the world requires an extraordinary amount of work.” That doesn’t make sense. The world is cruel. No one deserves this, let alone an Eagle Scout.

3 minutes. The next question goes to Fiorina, and it is basically the same. Why should you be taken seriously if your polls suck? Fiorina, like Perry, has suffered her share of failure, as CEO, as a Senate candidate, in her quest to make the top-tier debate. But she knows how to talk. So she answers with a pep talk, like an Aaron Sorkin script with less alliteration and more fortune cookie aphorisms. “The highest calling of leadership is to challenge the status-quo and unlock the potential of others,” she says. Preach.

4 minutes. Apparently the why-do-you-suck question is a thing. Now everyone else on the stage gets it. Former Pennsylvania Sen. Rick Santorum answers by saying he has a track record. Louisiana Gov. Bobby Jindal rattles off his accomplishments in office. Pataki drops pablum about rebuilding and restoring. Graham says he will “break the stranglehold that people enjoy on fossil fuels who hate our guts.” Presumably he means the people hate our guts, not the fuel.

10 minutes. Someone named Jim Gilmore is on the stage too. He claims to be a former governor, attorney general, prosecutor and Cold War spy. The fact that no one has tackled him yet suggests he is who he says he is.

11 minutes. Topic change to Donald Trump. More than 26 million mentions of him on Facebook, “some of it good, probably, some of it bad,” says Fox anchor Martha MacCallum. Some of it, you could assume, are rapists. What explains this “elephant that is not in the room” she asks Perry.

12 minutes. He has recovered. He is pointing with his knuckle to make his points. “How can you run for the Republican nomination and be for single-payer healthcare?” Perry says. “I mean, I ask that with all due respect.” This means he has no respect for Trump.

14 minutes. Jindal and Graham try to outdo each other with bold ways to take the Islamic State. And Jindal hits all his points, fluidly, with perfect sentences, but his voice is nasal and distracting, with strong hints of Southern Muppet. This takes the authority out of lines like, “We’re going to take the political handcuff off the military.” Graham is just terrifying. “They are coming here just as sure as I stand here in front of you,” he says of the bloodthirsty enemy.

21 minutes. More muscular talk about taking on Islamic terrorism. Everyone is tough. Everyone has experience. At one point this guy Gilmore interrupts to get in a word. Whoever he is, he is not a bad debater.

27 minutes. A question for Santorum: What would he say to children born and raised in America with undocumented parents that the Senator wants to deport? Santorum tells a story about how his father had to wait seven years to immigrate to America from Italy to join his grandfather. Santorum asked his father once if he resented missing his dad. “You know what he said to me? ‘America was worth the wait.'” In other words, America is great enough to split up families. “We’re a country of laws,” Santorum says.

31 minutes. After Perry dodges a question about his own plan to deport, another commercial break. An insulin treatment covered by Medicare. A chocolate vitamin drink called Boost.

34 minutes. MacCallum gets us going with a question about the unemployement crises as only Fox News would ask it. “How do you get Americans who are able to take the job instead of a handout?” Graham won’t take the bait. “I think America is dying to work,” he says. “You just need to give them a chance.”

37 minutes. This is not going to work. These debates will last three hours, 180 minutes. You have already read 1,000 words, and we have just begun. You love debates, you love our democracy, you love our country. But you love to click away too. Don’t lie. You do it all the time. There are technologies that monitor your behavior. You will leave this webpage before long. You will return to your life. Emergency action must be taken. The summary will be summarized.

39 minutes to 49 minutes. Questions about Iran and Medicaid expansion. An ad for some that looks like it was invented for Star Trek who projects photonic, thermal kinetic energy, a.k.a. light, into your body to relieve pain. The ad says it is medicine “for the digital age.” Like AOL and Mark Zuckerberg.

50 minutes to 67 minutes. Santorum says the Supreme Court’s same-sex marriage decision is like the Dred Scott decision, which found blacks could not be U.S. citizens, before it was undone by a constitutional amendment. A commercial for gold and silver coins. Pataki says he hates abortion but is pro-choice. Perry pantomimes holding the bottle of Wite-Out he will use on President Obama’s executive orders. It is the size of a small gopher.

69 minutes to 80 minutes. The moderators ask everyone to describe Hillary Clinton in two words. Almost no one uses two words. “Good at email,” says Perry. Closing arguments. And we are done. With the first part. Now comes the main event. Get a cup of coffee. We are just getting started.

Click here to read What You Missed By Not Watching the Primetime Republican Debate. 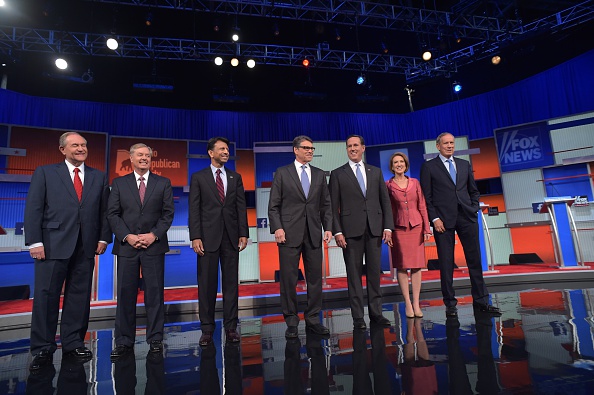 Here Are the Most Memorable Lines From the Republican Undercard Debate
Next Up: Editor's Pick